Griffiths following in her dad’s footsteps to Transylvania 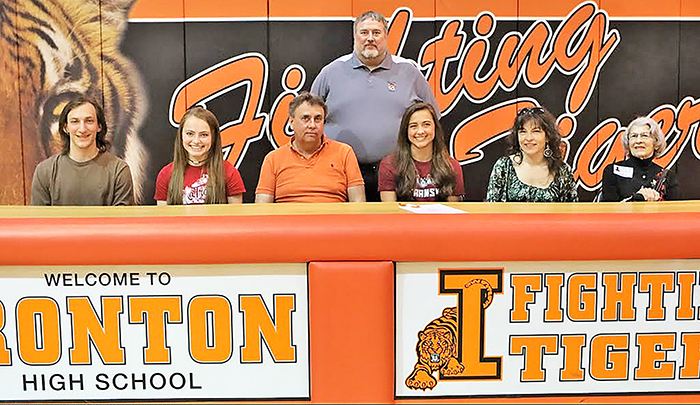 Instead of a “Take Your Daughter To Work Day,” Loralei Griffiths is going to her father’s alma mater.
The Ironton Lady Fighting Tigers’ senior track standout signed a letter-of-intent to run track for NCAA Division III Transylvania University Pioneers and return to her father’s college of choice.
Griffiths visited Kenyon, Ohio University, Marietta but settled on Transylvania.
“I liked Lexington. It’s a big city but the school is not very big. That’s where my dad (John) went to school,” said Griffiths.
Her father worked as a production manager/audio manager for a sound company that worked tours for country singer Billy Ray Cyrus until stopped working on tours.
“He traveled a lot. He went wherever he needed to go,” said Griffiths.
Besides track, Griffiths also runs cross country but admits that she prefers the oval surface to the grass and dirt.
“I like it because I’m good, I guess,” said Griffiths with a laugh. “I like running and I’m fast.”
Ironton coach Tim Thomas had nothing but praise for Griffiths and he is confident she will do well at the college level.
“She’s been one of the best athletes I’ve ever had and she is a tremendous worker. She’s one of the best workers I’ve had in 37 years. We had some session over the winter when we came in at 6 o’clock in the morning and lifted. That was her impetus to do that,” said Thomas.
“She’s one of the last ones to leave at night. She’s committed to sport and I think that shows why she wants to continue onto the next level.”
A normal meet has Griffiths doing 100-meter hurdles, the 300 hurdles, pole vault and the 4×100 relay. However, she has also been asked to run in the open 100- or 200- or 400-meter dashes as well as the 4×400 relay.
“I like the 100-meter hurdles, definitely,” Griffiths said of her favorite event.
Griffiths said the opportunity it there for her to compete in her freshman year.
“They have one really good hurdler right now and then everybody else is at the level I’m at right now,” said Griffiths. “I want to do it mainly to have fun since I enjoy it so much. School’s first, track’s second.”
Obviously, there is a different level of talent going from high school to college and Griffiths is very much aware of what she must do to compete at the next level.
“Right now, I four-step between more of the hurdles and what you should do is three-step. If I get more efficient over the hurdle, I get faster between the hurdles. If I can three-step, I can hopefully go down a second, second and a half,” she said.
While Griffiths is running track for Ironton, her twin sister Isabella is playing softball at St. Joseph.
“I went to St. Joe in the seventh grade. I did not like it at all,” said Griffiths who ran track at Ironton while attending St. Joseph. “I had to get a ride every day up here.”
When talking about the relationship with her twin sister, Loralei has a wide grin stretched across her face.
“It’s a rivalry all the time. We’re always being compared to each other. It’s just who’s better at what,” said Loralei.
But Griffiths said she has enjoyed her experience at Ironton.
“Ironton, as a whole, the way they handle sports is just better. It’s more of a family here anywhere else,” said Griffiths.
Griffiths chemical engineering is her major but she doesn’t have a major planned.
“If I do just chemistry, it would be for pre-med and I’d go to medical school for orthopedic surgery. If not, just straight chemical engineering and my Masters’ Degree in that,” said Griffiths.