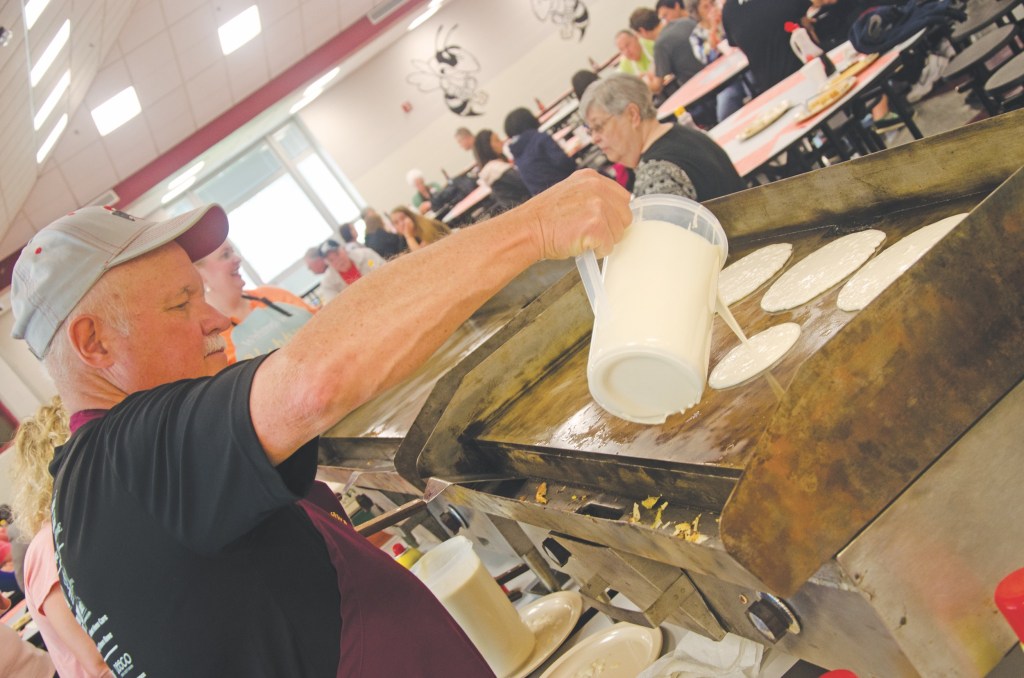 COAL GROVE — For the past 50 years, the Coal Grove Lions Club has hosted its pancake breakfast during the lead-up to Easter Sunday.

“We’re carrying on from the old Lions Club of yesteryear,” Tom Carey, vice president of the group, said.

The meal is one of three fundraisers the group does each year, including their May 5K race and a golf scramble in September.

Carey said all of the money raise goes into community projects in Lawrence County.

“Our main goal is sight seeing,” he said. “We help children to get glasses.”

He said names of those in need are submitted to the club, then the children get an exam.

“They walk out with glasses and we pay the bill,” he said.

He said they also provide meals for families in need during the Christmas and Thanksgiving holidays.

“Or, if a family experiences a catastrophe, we’ll step in and fill the void,” he said. “All the money stays in the county. I’m very proud of our group.”

The 5K race is set for May 23 at 7 a.m. and Carey said those who want to take part can register online at O Such Tri-state Race Planners on Facebook.

This will be the fourth year for the event.

At Saturday’s breakfast, children had an opportunity to meet with the Easter Bunny, as well as enjoy the meal, served by volunteers.

“We had 30-40 volunteers,” Carey said. “Everybody works with the Coal Grove Lions Club.

I think everyone is aware and a lot of the families are touched by what the group has done for the community. Of that, I’m very proud.”

Carey said the group has a bell that they ring at meetings, inscribed with the date 1946, marking the founding of the club 73 years, when the Ironton Lions Club served as their parent.

“We’re not in completion with each other and we work together on things,” he said.