Carver ‘center of attention’ after signing with Shawnee 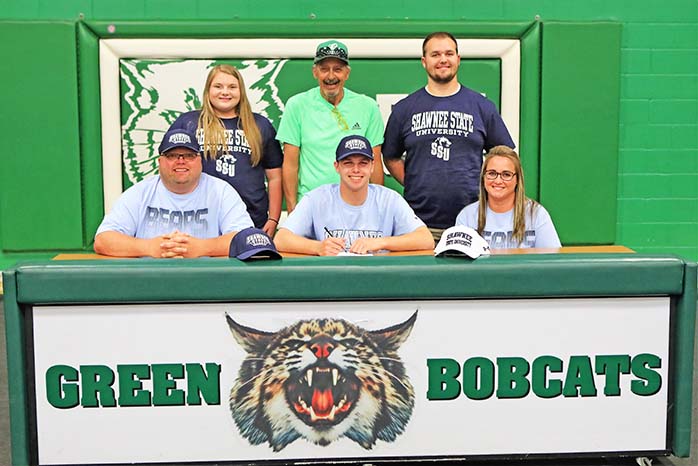 FRANKLIN FURNACE — “Put me in coach, I’m ready to play today. Look at me, I can be, Centerfield.”
When John Fogerty wrote the song “Centerfield,” Tayte Carver wasn’t born, but he could have easily been the inspiration.
The Green Bobcats’ senior baseball standout has roamed centerfield along with playing several other positions during his high school career. Now, Carver will get the chance to be “born again, there’s new grass on the field” after signing a letter-of-intent with the Shawnee State University Bears.
“They haven’t really told me what position they’re looking at me until fall, but one of my favorite positions is centerfield. I’ve always liked centerfield. I just like the center of the outfield,” said Carver.
Actually, Carver has played numerous positions including pitcher. Green head coach Dan McDavid said Carver could play anywhere but he foresees him as a middle infielder.
“A lot of colleges will try to recruit all shortstops and try to put them where they need them. They figure if he’s the shortstop on his high school team, he’s fairly athletic. Tayte is just that,” said McDavid.
“We’ve had him in center, we’ve had him at second, we’ve had him at short. He could play any of the corners. He’d probably be a pretty good catcher, too.”
Even though Carver may end up in the infield at Shawnee State, McDavid thinks the versatile senior would be good at his favorite position.
“They asked (New York Yankees’ Hall of Fame manger) Casey Stengel one time who was his best centerfielder. He said Tony Kubek who was the team’s shortstop. So, (Carver’s) one of those players you can plug in anywhere and he’ll excel,” said McDavid.
The addition of Carver at Shawnee State will give the Bears three players from the Bobcats’ current team. Fellow seniors Tanner Kimbler and Bryce Ponn signed earlier with SSU.
“I’ve played with them all through school, and I think it’s awesome to play with them at the next level. They’re some of my friends and I think it’ll be a cool experience,” said Carver.
After looking at some other schools such as Ohio University and Rio Grande, Carver said Shawnee was the easy choice for him.
“I look at a couple, but none of them stood out like Shawnee. I like how it’s close to home. That’s where some of my family members went,” said Carver. “He reached out to me and that stood out.”
McDavid said Carver will be a good fit for the Bears or any program.
“Tayte’s been a real player for us for four years. He’s a great athlete. He runs, he throws well, hits the ball well,” said McDavid.
“The thing I like about Tayte is he always plays the game with a smile on his face. He enjoys being out there. He might be our best baserunner, too. He’s a great kid to have on the team. He’s great in the clubhouse and a leader out on the field.”
When told how coach McDavid liked the fact he was always smiling, naturally Carver lit up a smile across his face.
“I guess it’s just the game, the people and the coaches I play for and the memories being made. It’s just awesome. I have tons of friends who are playing with me and the coaches McDavid and (Chris) Meenach are just awesome coaches. I wouldn’t have any other coaches,” said Carver of his love for the game he’s played since tee-ball.
Carver plans to become a radiology technician.