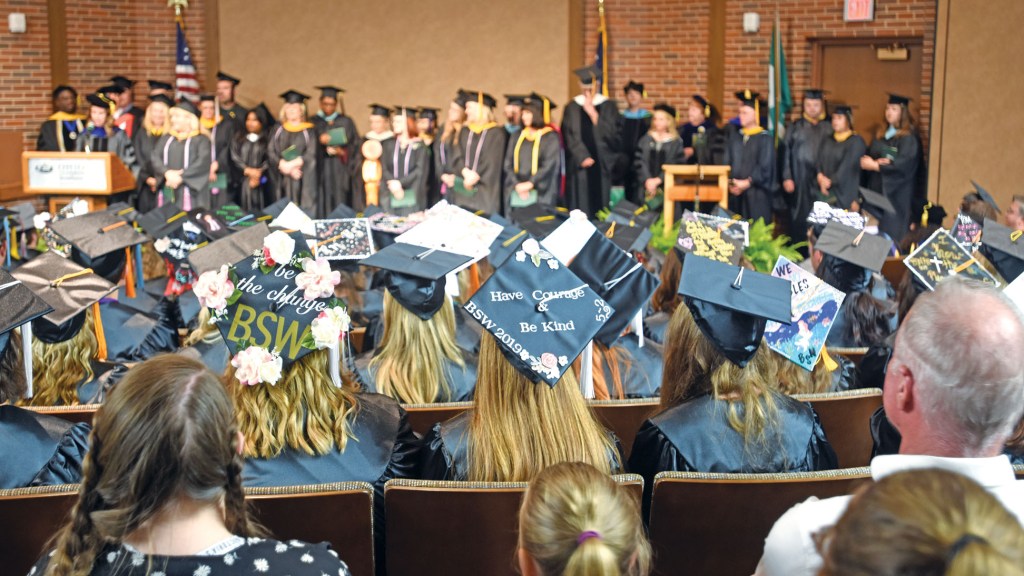 Some of the decorated caps of the graduates at the Ohio Southern University 2019 graduate recognition program on Thursday evening. The Tribune/Mark Shaffer

It is usually held on the Ironton campus’ Shafer Courtyard, but a heavy rainstorm earlier in the evening forced the event inside.

Graduates, speakers and those who arrived early were seated in the Bowman Auditorium. Since they were not allowed to stand in the aisles, a crowd was sent over to watch the event on closed circuit TV in the Mains Rotunda. That included OUS faculty members who gave up their seats for the families of the graduates.
Tyler Walters, a member of OUS Coordinating Council, made the opening remarks.

He said that at the first graduate recognition ceremony in 1989, they honored 46 graduates. On Thursday, there were 148 students that were going to be getting degrees with 84 in attendance.

“This evening, we celebrate your hard work and success,” she said before introducing Academic Division Coordinator Deborah Marinski who brought greetings from the faculty.

She congratulated the graduates on their hard work and said the faculty was there to celebrate their academic success.

“I can say, as a faculty member, there is no greater sense of professional pride and accomplishment than seeing all of you in your caps and gowns and walking across the stage with big smiles on your faces,” Marinski said. “As faculty, we know how hard you have worked to complete your degree, so we share in your excitement for graduation and what is to come.”

The 2019 Dr. Dan Evans Alumni Leadership Award went to Amy Frasure, of South Point. She is a 2010 OUS graduate and owner of Bullseye Total Media, which has offices in Charleston and Barboursville, West Virginia.

“I’m honored, humbled to receive this award from a place that I will always consider my home,” she said.
Frasure said she grew up believing the myth that if you wanted to be successful and weren’t going into the teaching or medical field, you had to move away from here to be successful.

“I stand before you as proof that is simply not true,” she said. “There are plenty of opportunities for each of you to be successful, right here at home. Sometimes, you just have to make your own way.”

She said that when she graduating she wasn’t sure what she was going to do for a career.

“I’m here to tell you it’s OK to not know your endgame,” Frasure said. “It is going to be fine. Not everyone is born with a purpose, some of us need to find ours.”

Lawrence County Commissioner DeAnna Holliday was the keynote speaker for the recognition ceremony. She said she never considered herself a motivational speaker and was nervous about talking to the graduating class, but she said she tried to think of things she had known when she was younger.

Her mother entered her into beauty pageants in an effort to make her only daughter less of a tomboy, a notion that the younger Holliday balked at. But she said going through the pageants was a help in finding her voice and she used her winning titles to show people that beauty competitions are not all about beauty, but about the opportunity to help and support the community .

In 2012, Holliday, while she was a member of the Dawson-Bryant School Board and a business owner, decided to enter the Mrs. Ohio America contest and won.

“I knew I was meant to be a public servant and I set my goal to continue to impact lives on a larger scale,” she said.

She said her experiences taught her to find her voice, to make a good first impression and to use influence wisely to help others.

“I challenge you to follow your heart, listen to your intuition, take risks, work hard and go after your dreams with everything that is within you,” Holliday said.