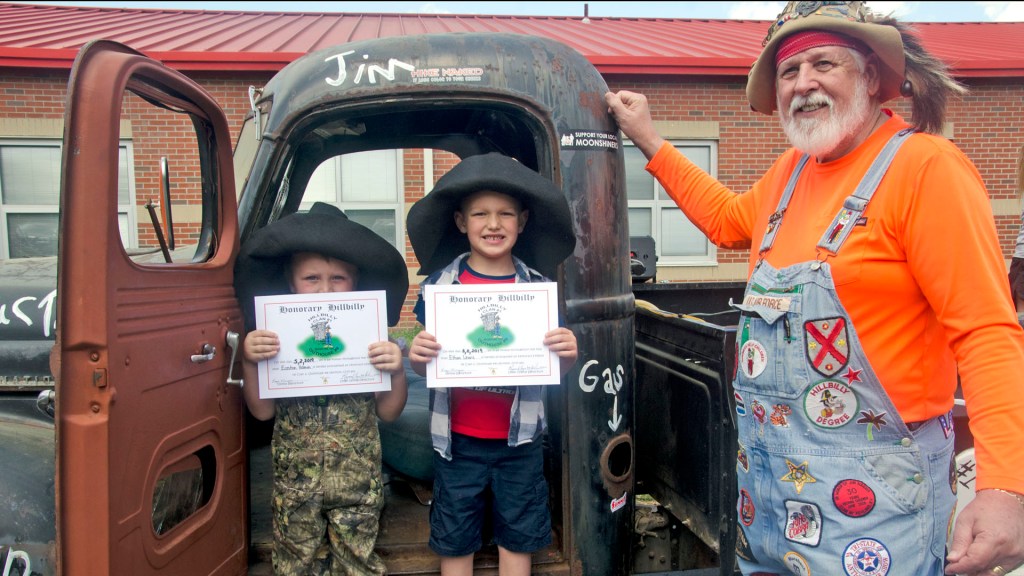 The Tribune/Heath Harrison Rock Hill preschool students Easton Hamm and Ethan Lewis pose with Ray McFarlin of the El Hasa Shriners Hillbilly Clan, Outhouse 8, of Ironton. Hamm and Lewis were the top two fundraisers for the school in their penny drive for the Shriners hospitals.

In total, students at the school raised $1,122.14 for the Shriners hospitals and the group’s transportation fund to take children to the hospitals.

In addition to meeting with the students and letting them play on their hillbilly trucks and a fire truck from Upper Township’s volunteer department, the Shriners also honored the top two fundraisers at the school, Easton Hamm, who brought in $537.07 for the effort, and Ethan Lewis, who raised $126.

Roger Morgan, of the Shriners, said the group also distributed information about preventing burns to the students. The Shriners hospitals specialize in treatment of severe burns.

“We sent that home with them,” he said. “This lets them know that we’re here. Even with all the advertising, a lot of people still don’t know.”

Morgan said the group conducts two schools drives a year, with the other being at South Point Elementary in the fall. A traveling trophy goes between the schools and Rock Hill, having raised the most, got to keep it this year, he said.

Morgan said the hillbillies have several events lined up for coming weeks.

On Tuesday, he said the group’s onions will arrive and be for sale.

“You can contact your favorite Shriner,” he said, and added that any leftover onions will be for sale at Pick ‘n Save on May 11.

Shriners onions are identifiable by a red bag, featuring a character wearing a fez, Morgan said.

On May 17, the Hillbilly Gals will host a dueling piano party fundraiser at the Ironton Moose. Tickets are $50 and will cover the show, dinner and refreshments. Those interested in attending can call Trina at 740-646-2820, he said.

On June 8, the Shriners will host the annual golf outing at Portsmouth Elks Country Club, with a shotgun start at 9 a.m. For more information, call Morgan at 740-532-8333.

All proceeds from fundraisers will go to the Shriners hospitals and the transportation fund.

In addition, the group is set to take part in the Ironton-Lawrence County Memorial Day Parade on May 27, where they have been a regular staple of the event for decades.