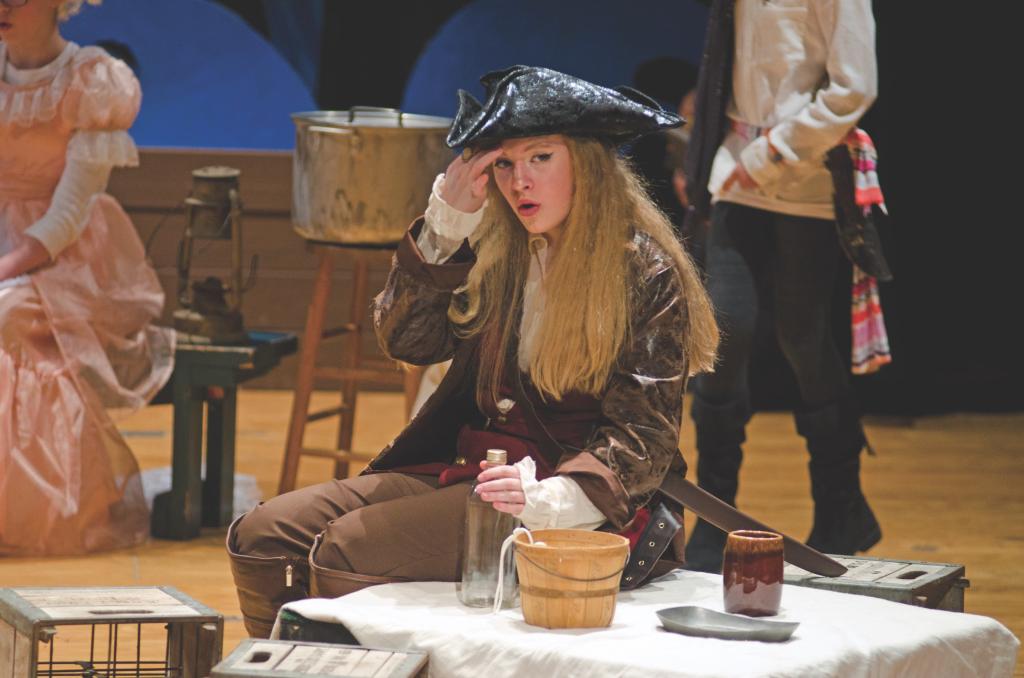 (The Tribune/Heath Harrison) Captain Bree, played by Annah Hensley, of Ironton, in a dress rehearsal of "Captain Bree and Her Lady Pirates" at Ashland Community & Technical College on Friday.

ASHLAND — Students in Aspire! Conservatory of Fine & Performing Arts spent several weeks preparing and, on Saturday, audiences got to see the fruits of their work.

The group staged a performance of “Captain Bree and her Lady Pirates” at Ashland and Community and Technical College, which was free to the public.

The organization, which offers a fine arts education in a Christian atmosphere, had been preparing at First Methodist Church in Ashland.

On Friday, they moved to ACTC, for their first dress rehearsal, Auretta Hensley, director of the play, said.

“It’s a semester class and they go from the page, to stage, to performance,” she said. “They learn about everything including makeup, costumes, blocking and music.”

She said they had been meeting one night a week leading up to the performance.

“This is the most difficult and interesting script we’ve ever done,” she said.

The musical tells the tale of Capt. Jennings’ ship, which taken over by Bree and her pirates. They demand gold in exchange for the lives of their prisoners.

As the musical progresses, the lines between the two ships’ occupants blurs as they get to know each other.

Hensley is from Ironton, as are music director Kayla Harmon and Aspire director DeNeil Hartley.

The cast came from throughout the Tri-State. The titular role of Bree was played by Annah Hensley, of Ironton. Others from Lawrence County included Rachel Chaffin, Kiayra Litteral, Noah Swann and Hannah Chaffin.

“Our cast runs from seven to 16 years old, so we have a huge range,” Hensley said.

Saturday’s show drew more than 200 people to the theater.