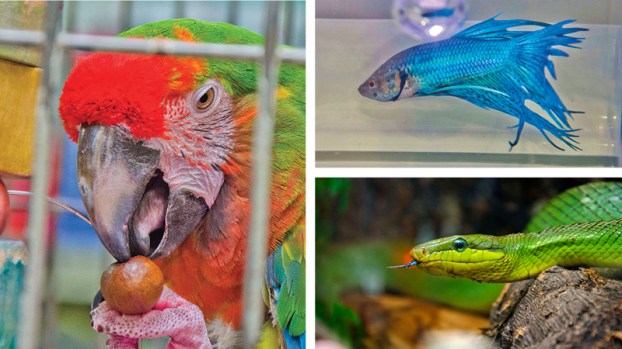 Bert’s also has birds, reptiles, amphibians and other small creatures, but they remain most known for their aquatics. (Photography by J.Bird Cremeans)

Generations of Friends: Bert’s Pet Center has served area since 1958

Fur, fins and feathers — oh my!

For more than 60 years, animal lovers from across the region have frequented Bert’s Pet Center for supplies to keep their companions happy and healthy.

“We are proud to be the place for all your pet needs,” owner James “Jim” Wente Jr. said.

The business, which was started in New Boston, Ohio, by Bert Eusler in 1958, has been in the Wente family since 1971. Jim and his wife, Keisha, took over for his parents in 2017.

“I tried some other jobs growing up, but I kept coming back. It’s kind of like that old saying that it’s not really work if you’re doing what you love. I mean, it’s still hard sometimes, but when you’re doing it for yourself and for your family, then it’s more meaningful,” Wente said. “It’s been really cool seeing all of the different generations come in.”

And now, Wente is able to welcome more customers to Bert’s than ever before. In January, the store moved from its former location on Diederich Boulevard to a new building near Lowe’s and Dunham’s Sports on Russell Plaza Drive.

“The response has been mind-blowing. Our parking lot has been filled to capacity on several occasions,” Wente said. “We’ve done at least three times more business than what we thought we’d do, and that’s probably because the new building stands out much more than our previous one. We’ve had people coming in that have never visited us before.”

Expansion had been a goal for a while, Wente said, but nothing had come to fruition until last spring, when he was led to the perfect spot.

“We put God first in in everything that we do, and sometimes, he closes doors, but every time that would happen, another would open. We looked at other options — other buildings — and nothing panned out,” he said. “Then, one day, when I was driving from church, I saw a sign that this piece of land was for sale. I called, and someone [with Cartee Land Development, Inc. dba Arby’s, who owned the property] answered on the second ring. It all developed from there. We’ve been blessed.”

A groundbreaking for the new store took place in July. The building, constructed by Morton Buildings, sits on about an acre of land and is more than 1,000 square feet larger than the previous, allowing for more inventory and services to be added.

“We’ve been able to increase every department and been able to add grooming to the mix,” Wente said. “We’re also planning on building a separate facility out back for boarding and doggy day care.”

Dog owners are a big part of Bert’s customer base, and in addition to having food, treats, toys, clothing and other items, the store has a selection of hand-picked, small-breed puppies available for sale.

“Some people still want certain breeds of dogs. We only buy from local breeders, and we see the puppies and their parents beforehand. That’s why we say they’re handpicked. We have no affiliation whatsoever with puppy mills, and we keep our puppies in open petters as much as possible,” Wente said. “We are also looking into doing some community-based adoption events [Bert’s already adopts out kittens on a limited basis].”

Bert’s also has birds, reptiles, amphibians and other small creatures, but they remain most known for their aquatics.

“We still maintain our reputation as experts in fish,” Wente said. “With over 6,400 gallons of freshwater and saltwater fish and live coral on display, we have the largest selection in the Tri-State area.”

Those who have been to Shawnee State, Huntington Museum of Art and Highlands Museum have seen some of Bert’s work.

“Something that really sets us apart is that we offer custom design, installation and maintenance of aquariums — more for businesses, but we also do homes.”

All in all, no matter if you’re a dog or cat owner or prefer a pet that swims, flies, hops or slithers, Wente said Bert’s dedication to their customers remains the same.

“All of our employees have pets themselves and really care about what they do,” he said. “We only carry what we think is best and what we use with our own animals, but we will special order anything that people request. Honesty and customer service are very important to us. We want to continue to be a trusted source and be here for many more years.”

Bert’s Pet Center is located at 480 Russell Plaza Drive in Ashland. For more information, visit bertspetcenter.com or call 606-325-4205. Current hours of operation are 10 a.m.-8 p.m. Monday-Saturday and noon-6 p.m. on Sunday. Find them on Facebook: @bertspetcenter.

Fresh from the kitchen

Navarino Bay offers fresh, Greek food in a modern setting Georgios Alexandropolous has worked in the restaurant business for many... read more