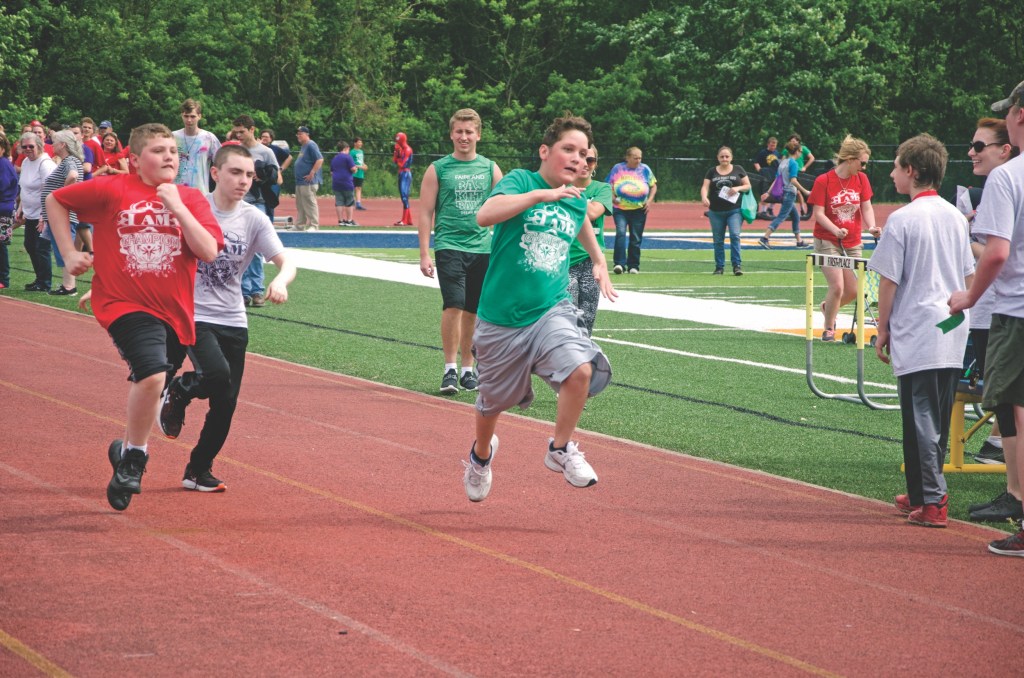 (The Tribune/Heath Harrison) Athletes compete in the boys 50-yard dash at the Lawrence County Special Olympics at South Point High on Thursday.

SOUTH POINT — For the fourth year in a row, the Lawrence County Special Olympics took place at South Point High School, drawing athletes from schools across the county.

“It’s all coming together,” Thea Brown, a Chesapeake teacher and site coordinator for the event, said. “The kids are having fun and are getting their medals.”

Athletes took part in the 50-yard dash, the long jump and a softball toss event, as well as took part in adaptive games inside at the beginning of the event.

Brown said there were about 400 athletes present.

“But we’re feeding 600 today,” she said, citing the number of volunteers taking part.

The event had rotated sites for several years, but has found a home at South Point High School — something the school’s former principal, Ben Coleman, had advocated strongly for, citing the track facilities and its central location in the county.

“We love hosting and we’ll volunteer to, as they long as they want us to,” T.J. Howard, assistant superintendent for South Point schools, said.

In addition to the school districts, Easter Seals, Open Door School and Collins Career Technical Center were present for the event.

The Special Olympics, founded by Eunice Kennedy Shriver in 1968, is the world’s largest sports organizations for athletes with disabilities. More than 5 million athletes take part in its events world wide.

Brown said she had seen one of her students become more excited as they day went by, especially after she received her medals.

“That’s what it’s really all about,” she said.