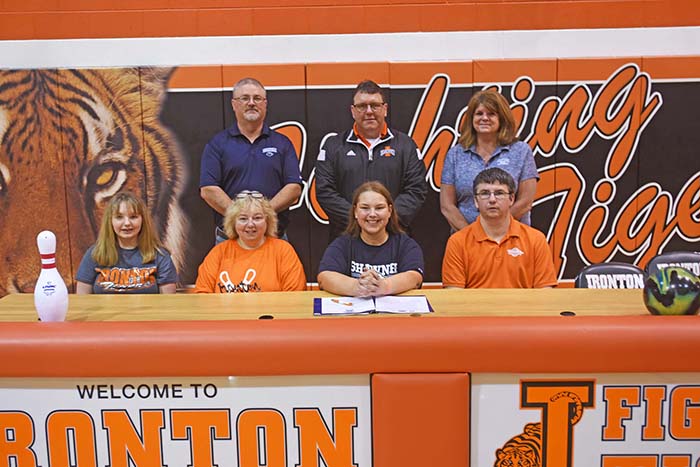 When a window closes, a door opens.
And when that door opened, Alison Wilds kicked it down.
After spending her early years playing softball and basketball, Wilds turned away from those sports and picked up bowling.
It was the right choice.
Three years later, the Ironton Lady Fighting Tigers’ senior bowler Alison Wilds has improved her game and signed a letter-of-intent with the Shawnee State University Bears.
“I was into other sports and I didn’t get much playing time, so I just decided to switch to bowling and try it out,” said Wilds.
“At first, I just did it for the fun of it, but then after I started to get better at it I took it as better competition. Scores don’t lie in the bowling world. You can go out and be the best one and it obviously shows. If you sit the bench, then there’s something wrong with your scores.”
The success led Wilds to increase her practice time. Besides team practices, she was heading to the bowling alley three or four more times a week.
“I was really obsessed,” she said.
Ironton bowling coach Steve Cartmell echoed Wilds obsession claims, although he preferred to describe it as an outstanding work ethic.
“Alison is the epitome of a bowler a coach looks for. She’s somebody who works hard not only in practice but on her own free time,” said Cartmell.
“Her first year to her senior year, she has put in extra work on her non-practice days and bowled six, seven games a day when she didn’t have to and only to improve.
The work ethic, the obsession, the success and enthusiasm are all the things that drew the interest of Shawnee State head coach Bryan Sturgell.
“We saw her compete in a few matches and we liked what we saw. We’re a young program so she’ll have plenty of opportunity to compete for us,” said Sturgell.
“We just like her work ethic and her positive attitude and we can tell she’s going to be a good team player for us and that’s what we’re trying to build. With all the positive things, it’ll come to good results.”
Getting the opportunity is all Wilds wants and she believes that rest is up to her.
“I want to be the best one on the varsity team starting out, but I’ll have to work for it. It’s going to be tough, but I’m pretty sure I can get up to that level and be the best,” said Wilds.
Cartmell said Wilds’ desire to work hard is what makes her a team leader.
“That’s the best thing a coach could ask for, to have a player who works that hard and is a team leader for our girls’ bowling team and our boys’ team,” said Cartmell.
“She’s been an asset to our bowling team for three years. I’m sure going to miss her, but this is a great day for her.”
Wilds expressed a mutual respect and admiration for her coach.
“Steve has been one of the best coaches I’ve ever been coached by, really,” she said.
Wilds is leaning toward environmental engineering as a major.