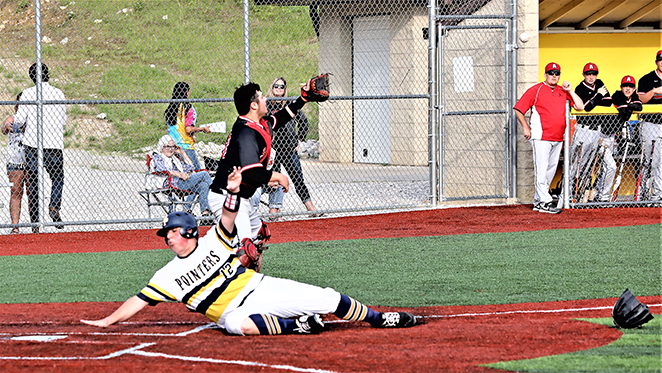 South Point Pointers’ Ben Walls slides safely into home plate with a run in the seventh inning during Wednesday’s Division III sectional tournament game. The Pointers made a late comeback but lost to Alexander 6-3. (Photo Courtesy of Tim Gearhart)

SOUTH POINT — After digging a hole early, the South Point Pointers couldn’t find the dirt to fill it back up.
South Point fell behind 6-0 after two innings and lost 6-3 to the Alexander Spartans on Wednesday in the Division III sectional tournament semifinals.
“Alexander hit the ball well. We spotted them six runs after two innings. Brody Blackwell held them the rest of the game,” said Pointers’ coach Larry Goodwin.
“I’m extremely proud of our guys for not giving up after getting six runs down. We scored three in the seventh but our comeback efforts fell short.”
The Spartans scored quickly with a run in the first inning as Drew Davis, Isaac York and Luke Chapman all singled to start the game.
Alexander came back to get five runs in the second inning.
Mason Hanning singled, Colby Carsey put down a sacrifice bunt, Jacob Jordan singled to put runners on the corners and Davis had an infield hit for an RBI.
York singled to center as a run scored and Chapman grounded out to drive in Davis.
Connor Truax walked and Cameron Bayha and Jacob Phillips followed with run-scoring singles.
South Point (10-12) got all three of its runs in the bottom of the seventh.
Ben Walls singled and Brody Blackwell walked to start the inning. After a fly out to center and a strikeout, Zach Cline singled to drive home Walls.
Dawson Runyon doubled to left to drive in two runs but the next batter struck out to end the game.
Alexander threatened with one out in the fourth when Chapman walked and Truax singled him to third. But Blackwell got a strikeout and fly out to end the inning.
With one out in the sixth, Isaac singled, Chapman reached on an error and Truax was hit by a pitch to load the bases. But a force out at home and fly out to Branden Dillon in left field ended the potential rally.
Pointers’ starter Brycen McCann threw to only three batters and was touched up for three hits and a run as he took the loss.
Blackwell pitched the rest of the game and gave up nine hits, five earned runs, struck out four and walked two.
York went the distance for the win. He struck out eight, walked one and all three runs were earned.
Alexander 150 000 0 = 6 12 0
South Point 000 000 3 = 3 4 3
Isaac York and Colby Carsey. Brycen McCann, Brody Blackwell (1) and Drake McClure. W-York (IP-7.0, H-4, R-3, ER-3, K-8, BB-1). L-McCann (IP-0.0, H-3, R-1, ER-1). Blackwell (IP-7.0, H-9, R-5, ER-5, K-4, BB-2, HBP-1). Hitting- Alex: Drew Davis 2-55 rbi, Isaac York 3-4 rbi, Luke Chapman 1-3 2-rbi, Connor Truax 1-2, Cameron Bayha 1-4 rbi, Jaco b Phillips 1-4 rbi, Mason Hanning 2-4, Jacob Jordan 1-4; SP: Ben Walls 1-3, Zach Cline 1-3 rbi, Dawson Runyon 1-3 2B 2-rbi.

Hunt tells Browns, ’You can trust me,’ after violent…