Pointers’ Fox rises up in time to sign with Shawnee State 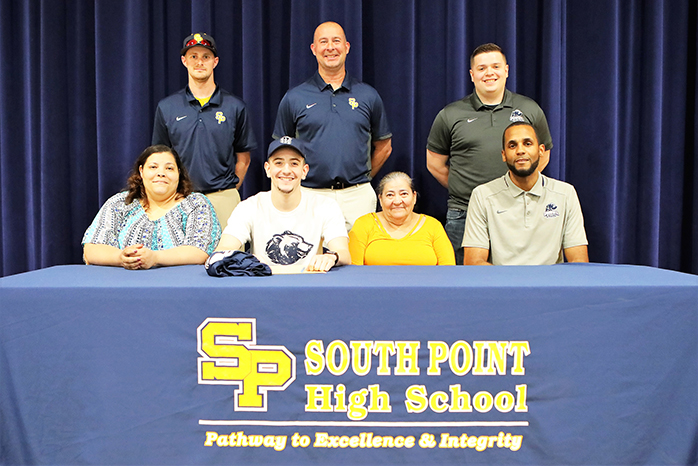 SOUTH POINT — Much like the Phoenix — the mythical Greek bird that continues to rise after death — Tayshaun Fax just keeps rising from the ashes.
Late in his junior season, Fox suffered a torn ACL and missed the last few games and the postseason. Surgery and recovery made for a dormant basketball schedule for the next nine months.
Once he appeared healed, Fox started playing and practicing. But just before the first game, he suffered a second knee injury and was lost for his entire senior season.
Fox’s dreams of playing college basketball appeared shattered.
But then the smoke cleared and a phone call came from Shawnee State Bears head coach Delano Thomas who offered him a chance to play again.
Shaking the ashes from his sneakers, Fox signed a letter-of-intent on Wednesday to play for Shawnee State and revive his college dreams.
“It was rough getting used to watching the game for the second year in a row. There were some nights I wouldn’t sleep knowing that I can’t play or wondering if I’d ever play again. When I got the call from coach Thomas after we played Ironton, I saw the light at the end of the tunnel,” said Fox.
“It seemed worth it, but it was really rough getting used to just watching the game, going through the rehab, having to have the surgery again,”
As a junior, Fox averaged 17.9 points a game and was first team All-Southeast District Division III and third team All-Ohio. He also eclipsed 1,000 careers points with two regular season games and the tournament left to play.
But that’s when tragedy struck for the 5-10 guard.
“The first time they said I had an infection in my leg that ultimately made my ACL tear for the second time. So, I had the surgery on that in January, and then I had to have the reconstruction surgery on the ACL in March. Now, I’m just recovering,” said Fox.
Thomas isn’t having second thoughts about signing Fox despite the two knee surgeries. In fact, it’s quite the opposite.
“For us, Tayshaun is the type of player who is going to be unselfish, be determined, a very good character kid and I think he’ll be a very good player for our system,” said Thomas.
“I’ve heard nothing but great things about him. After I met him and talked to him, I learned more about his passion. It was great to hear he had some growth. Every kid is going to go through that growth academically as well as on the court.”
Thomas talked to Fox about taking a redshirt this coming fall and he agreed with the coach.
“It would give me more time to recover from this injury and get used to going to school, practices and travel,” said Fox.
“He just wants me to become a better player and a better person and get used to the routine, figuring the game out and getting used to the college level.”
Fox said that he probably too anxious after the first injury and returned prematurely.
“That was the mistake I made the first time. When I felt normal and like I was back on my feet again, I wasn’t playing hard but just trying to get back into the rhythm. Now, I’m just staying off my feet as much as I can, going to rehab three times a week, and only doing stuff for my knee at rehab,” said Fox.
“I’ll get to that point. I’m not sure if it’ll be a year, eight months, nine months, but I’m sure this time around, the time frame I’ve been given, I’m certain I’ll be back to 100 percent and be able to play at the college level.”
Fox can handle the ball but he is also an outstanding scorer. His unique skill set has Thomas planning to play him at point guard.
“For our system, sometimes we’ll play two point guards at the same time. Sometimes it’ll be just one. Tayshaun will make his teammates better around him,” said Thomas.
Fox said that the second knee injury has made him more cautious, but it has also made him more aware of the bigger picture beyond basketball as he looks toward majoring in business.
“At first, honestly, I was afraid of never playing again so I had to come up with a Plan B. I really didn’t want to go through the surgery. It’s a gruesome thing to go through and I wouldn’t wish that upon anybody. It’s rough,” said Fox.
“I’d say, when I found motivation, it was when coach Thomas called me. Before that, it was on me, my family. I felt that being hurt again was a sign that maybe I shouldn’t try to go forward. But, here I am.”
Tayshaun Fox is still standing and he’s spreading his wings just like the Phoenix.