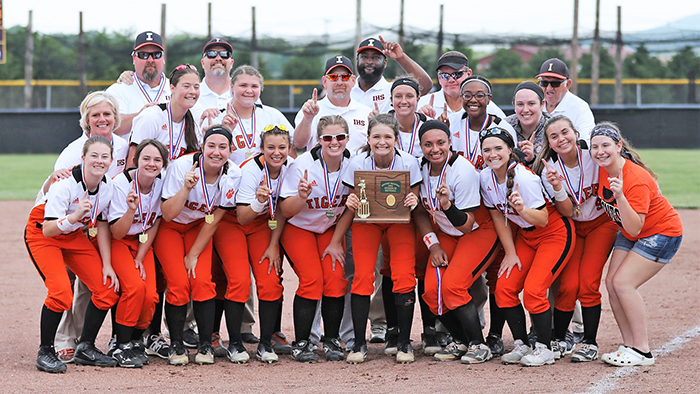 CHILLICOTHE — The Ironton Lady Fighting Tigers are going to a place they’ve never seen before.
Well, it’s not that some members of the team haven’t been to Lancaster, but this will mark the Lady Tigers first-ever regional tournament appearance in program history after rolling past the Westfall Lady Mustangs 10-0 in a five-inning run rule win on Saturday in the Division III district finals.
Keegan Moore was dominating once again as she limited the Lady Mustangs to just two hits while racking up 10 strikeouts including the first three outs and last three outs of the game. She did not walk a batter.
Ironton — with a softball program record for wins at 26-1 — will now play the Leesburg Fairfield in the regional semifinals at 6 p.m. on Wednesday at Lancaster High School.
Fairfield beat Wheelersburg 8-5 in the other district title game on Saturday.
Ironton cranked out 14 hits against two pitchers with Mary Beth Burton going 3-4 with a double and a home run.
Peighton Rowe was 2-4, Taiya Hamlet and Moore both 2-3 with an RBI, Haylee Stevens 2-3 and two RBI, Riley Schreck 1-2, Kylee Richendollar 1-3 with a double and two RBI, and Kiandra Martin 1-3 with a home run and two RBI.
It didn’t take Ironton long to get its offense in gear.
Burton doubled leading off the game and Rowe singled her to third.
Rowe stole second on defensive indifference but Burton scored on a passed ball. Rowe came home on Hamlet’s ground out.
The Lady Tigers added three runs in the third inning with Burton igniting the rally once again as she slugged a leadoff home run.
Hamlet singled and went to second on an outfield error. She went to third when Demi Sands grounded out and scored on Moore’s base hit.
Moore went to second on a passed ball and scored on an RBI single by Stevens.
Ironton got five more runs in the fifth to open up a 10-0 lead.
Hamlet singled, Sands put down a sacrifice bunt, and Moore and Stevens both singled. Schreck flied out deep to advance the runners and they both scored on Richendollar’s double.
Martin then capped the uprising as she smacked a two-run homer.
Westfall (23-5) got its first baserunner in the third on an error but Moore struck out the side.
The Lady Mustangs only hits were a one-out single by Ayzia Fullen in the fourth and a two-out single by Kylee Henry in the fifth.
Ironton 203 05 = 10 14 1
Westfall 000 00 = 0 2 2
Keegan Moore and Demi Sands. Marcy Dudgeon, Ayzia Fullern (3) and Maddie Mullins. W-Moore (IP-5.0, H-1, R-0, K-7, BB-0). L-Dudgeon (IP-2.2, H-6, R-5, ER-5, K-3, BB-0). Fullen (IP-2.1, H-8, R-5, ER-5, K-0, BB-0). Hitting-Ironton: Mary Beth Burton 3-4 2B HR rbi, Peighton Rowe 2-4, Taiya Hamlet 2-3 rbi, Keegan Moore 2-3 rbi, Haylee Stevens 2-3 2-rbi, Riley Schreck 1-2, Kylee Richardson 1-3 2B 2-rbi, Kiandra Martin 1-3 HR 2-rbi; WF: Ayzia Fullen 1-2.

Pointers’ Fox rises up in time to sign with…