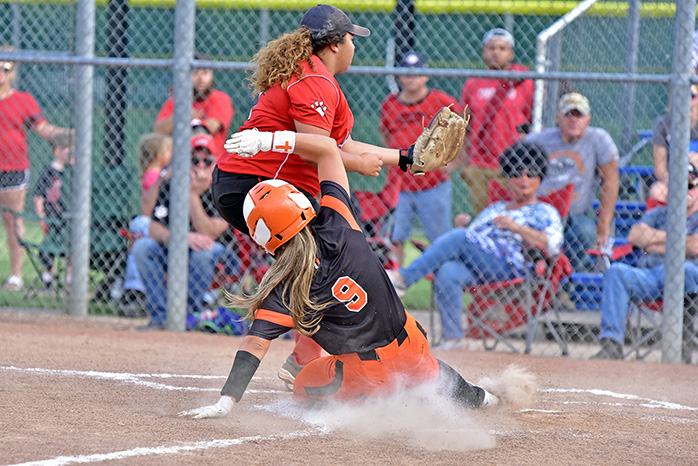 CHILLICOTHE — It’s never easy to get three outs, especially when it’s the final out.
The Ironton Lady Fighting Tigers were one out from reaching the regional finals.
But the Leesburg Fairfield Lady Lions took advantage of an error to score three unearned runs and rally for a 3-2 win over the Lady Fighting Tigers in the Division III regional semifinals on Wednesday at Lancaster High School.
Ironton (26-2) led 2-0 until giving up the three unearned runs in the seventh.
Haleigh Lowe and Molly Thackston singled to put runners on the corners with two outs.
Halle Hamilton went ahead 2-0 in the count before Keegan Moore threw two called strikes. Hamilton fouled off three straight pitches and then reached on an error as both runners scored.
Hamilton ended up at third base on the error and Lyndee Spargur singled her home with the go-ahead run.
Ironton was retired in order in the bottom of the seventh.
Fairfield will play Byesville Meadowbrook at noon on Saturday in the regional finals. Meadowbrook outscored Sugarcreek Garaway 14-9 in the first game.
The regional winner advances to the state tournament at 3 p.m. on Thursday, May 30, at Firestone Stadium in Akron against the Poland Seminary vs. Mantua Crestwood winner.
Moore pitched well enough to win. She went the distance and allowed six hits, struck out nine, walked one and hit a batter. All three runs were unearned.
After a scoreless first inning, Ironton got a run in the second.
Demi Sands and Haylee Stevens singled, moved up on Riley Schreck’s ground out and Sands scored on a passed ball.
The Lady Tigers added a run in the third inning to make it 2-0.
Kiandra Martin singled, Mary Beth Burton bunted for a hit with Martin going to third. Peighton Rowe then grounded out as Martin scored.
The Lady Lions (23-1) got two hits in the fourth inning when they mounted a scoring threat.
Spargur led off with a single, moved up on a sacrifice by Megan Gragg and went to third when a fly ball by Layla Hatton dropped in for a double.
But Moore got Lauren Arnold to line out to shortstop Taiya Hamlet to end the inning.
In the sixth inning, Hamilton had a leadoff double and Kaitlin White drew a two-out walk. But Hatton grounded out to Hamlet to end the inning.
Burton, Hamlet and Sands were all 1-3 while Stevens — the lone starting senior — and Martin each went 1-2 as Ironton had six hits.
The game marked Ironton’s first-ever trip to the softball regional tournament. The Lady Tigers also won their second Ohio Valley Conference title this season.
Leesburg 000 000 3 = 3 6 1
Ironton 011 000 0 = 2 6 1
Kaitlin White and Lauren Arnold. Keegan Moore and Demi Sands. W-Moore (IP-7.0, H-6, R-3, ER-0, K-9, BB-1, HBP-1). W-White (IP-7.0, H-6, R-21, ER-1, K-8, BB-0). Hitting-LF: Lyndee Spargur 2-4, Layla Hattan 1-2 2B, Halle Hamilton 1-2, Haleigh Lowe 1-3, Molly Thackston 1-3; Ironton: Mary Beth Burton 1-3, Peighton Rowe RBI, Taiya Hamlet 1-3, Demi Sands 1-3, Haylee Stevens 1-2, Kiandra Martin 1-2.