Honoring those lost at sea: Navy Night draws a crowd to Center Street Landing in Ironton 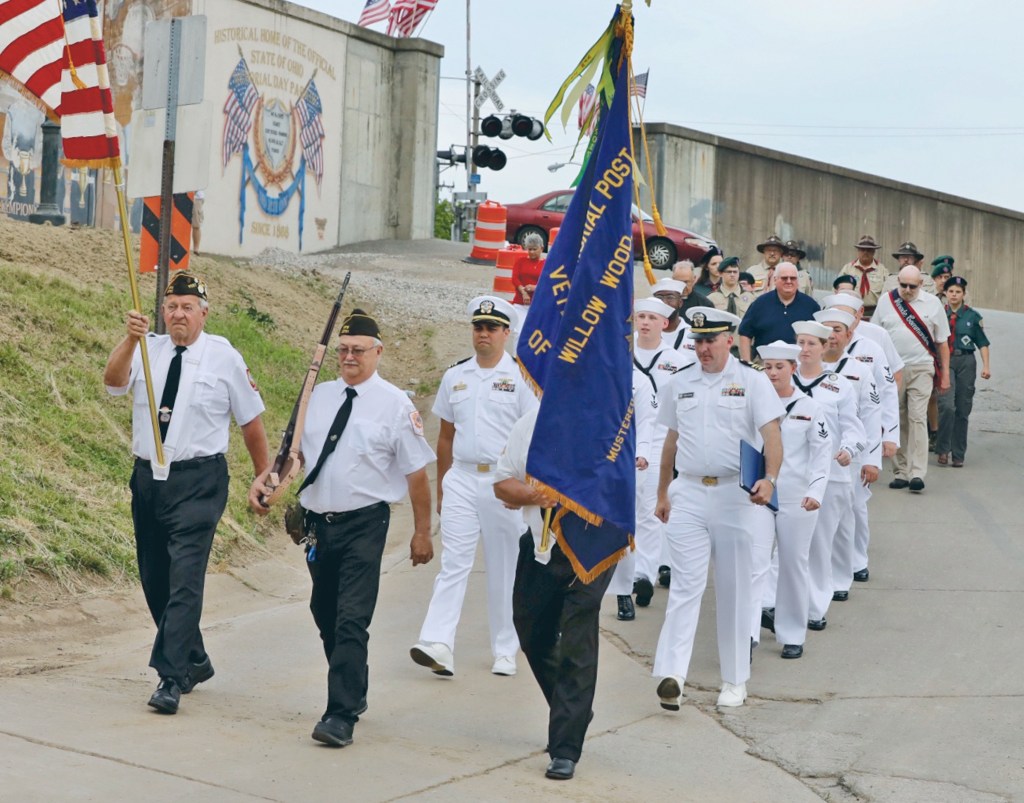 As is the tradition on the Thursday before Memorial Day, a crowd gathered at the Center Street Landing along the Ohio River in Ironton to honor the military personnel lost at sea.

It started with VFW Post 2761, AmVets 141 and American Legion Post 806 Honor Guard leading U.S. Navy sailors, various dignitaries and Ironton Boy Scout Troop 106 to a spot where a podium was set up for the ceremony. On standby was a boat with the Lawrence County Sheriff Marine Patrol, ready to lay a wreath in the river.

George earned his law degree at West Virginia University of Law in 2001. He has served in several naval posts including training criminal investigators in Iraq in 2007-2008, training Marine attorneys and paralegals, being a defense attorney in the Navy-Marine Corps Court of Criminal Appeals and serving as a reserve judge advocate.

He said spoke of the various places that the Navy was operating, but people might not think about.

He said there are pilots in Jacksonville, Florida flying the Navy’s newest aircrafts — the Triton drones, which watch the coasts of Africa and looks for smugglers and pirates.

“These sailors are on the most unusual deployment ever in our history,” George said. “They are literally deployed while still at home, with their aircraft flying from Jacksonville halfway around the world every day to maintain the safety of the ship lanes.”

He also said there were sailors deployed in Estonia to provide technical assistance to keep the Russians on their side of the border. In the Persian Gulf, fast patrol boats watch the Iranian Republic Guard to make sure oil tankers are safe. In the Pacific Ocean, there is a fast attack submarine silently following a Chinese missile submarine.

“They make sure that should the world ever catch on fire, those missiles never fly towards this country,” George said. “No one will ever know they are there, unless it becomes necessary for them to reveal themselves.”

He said that so much of what the military does is “standing watch,” waiting for the other side to make a move.

He asked people to keep in mind that these sailors are ordinary Americans that come from small towns like Ironton and that they are all volunteers.

“Every one of them knows all too well what they are getting into when they volunteer,” George said.

Members of Ironton Boy Scout Troop 106 conducted an American flag retirement ceremony for a flag that was being retired after flying over the Center Street Landing last year. As the Scouts folded the flag into a triangle, Scoutmaster Dave Lucas explained the many symbolisms of the folding process.

At the end of the ceremony, the Scouts presented a wreath to the Marine Patrol deputies who placed it in the Ohio River in honor of those lost at see.

The 151st Ironton-Lawrence County Memorial Day Parade will begin in Ironton at 10 a.m. The parade route begins Fourth and Center streets, goes up S. Third Street to Quincy Street, turns left on Sixth Street down and ends on Park Avenue.

See Wednesday’s edition of The Tribune for coverage of the 151st Ironton-Lawrence County Memorial Day Parade.