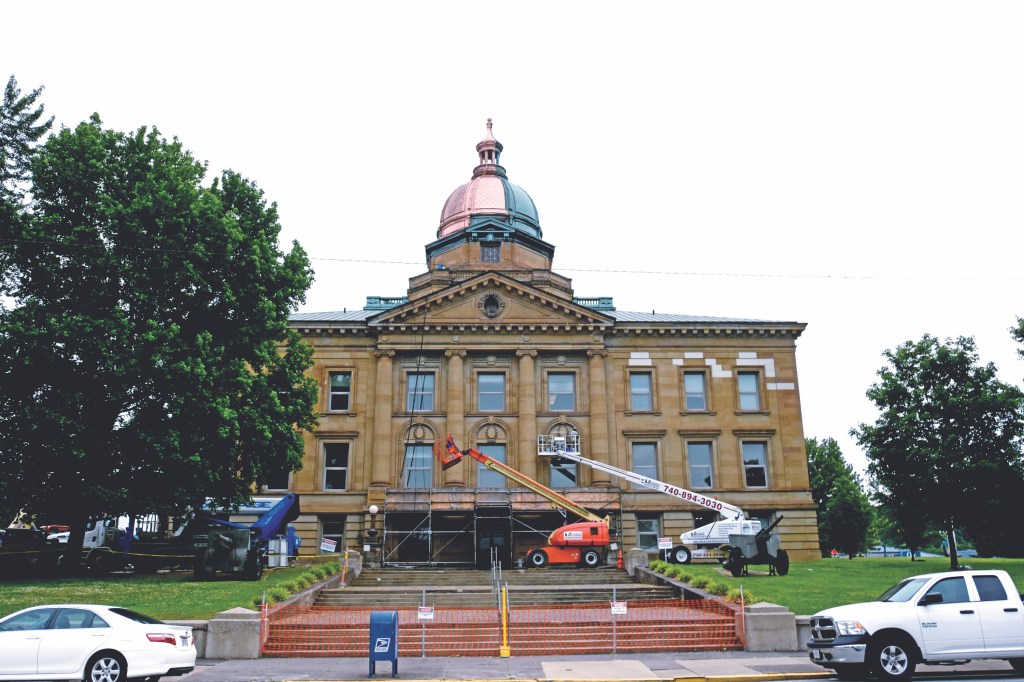 (The Tribune/Mark Shaffer) The dome of the Lawrence County Courthouse has had half of the green paint stripped away to reveal the copper underneath. Work is being done to the Fourth Street side of the building to repair 110 years of water eroding the building.

Anyone driving past the Lawrence County Courthouse has probably noticed the dome is shining in the sunlight.

Crews from The Perfection Group are not painting it copper, they are taking off old paint that was put on it to have the patina of old copper.

“The paint is being soda blasted off,” explained Chris Kline, the Lawrence County chief deputy auditor, adding that the crews are using a baking soda substance because “sand is too abrasive for copper. And then they will put on a sealant so it keeps the shiny copper look for 20-25 years. So it will look good for a long time.”

Crews are also working on the front of the building on the Fourth Street side.

“They are going through and cleaning up all the stone work and the grout lines. Some of the corbels at the top have eroded and they are rebuilding those,” Kline said. A corbel, in this case, is a stone bracket that juts from the wall to help support the structure above it. “They are made out of sandstone and over time, the water has eroded those. There has been 110 years of water on the building, so that happens.”

Kline said that there was a slight delay in getting started on the cleaning of the dome after a lift needed to reach the high point broke and had to be sent off for repair.

“So, they are a few weeks behind schedule,” Kline said. “So, we are hoping that the Fourth Street Entrance is will be open again in two or three weeks. But it depends on if the weather holds out and they can get everything finished on the top of the dome.”

Inside the courthouse, the work is finished on the public elevator and it will be inspected on Thursday.

“Once it passes inspection, it will be reopened to the public,” Kline said.

A second elevator that is used to transport prisoners to the courtrooms will undergo renovation next.

When the public elevator was being repaired, they also had to redo the fire alarms.

They also put in new heating and cooling units in the courthouse.

“The other HVAC system was 45 years old or so, so it was time for new units” he said.

Kline had previously said that with new LED lights installed and the new air conditioners and heaters replaced, the courthouse will save about $1,000 in month.

The total cost of the project is $6.5 million with $4 million in funds coming from the state, which was given to counteract the loss of the Medicaid Managed Care Organization sales tax.