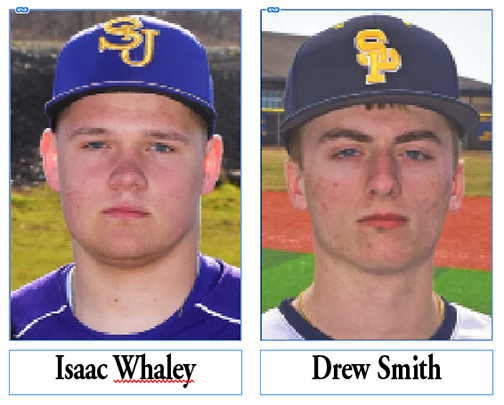 Baseball teams need to be strong up the middle. A couple of local baseball players are proof of that.
St. Joseph Flyers’ senior shortstop Isaac Whaley and South Point Pointers’ senior outfielder Drew Smith capped stellar careers by being voted to the Ohio High School Baseball Coaches Association All-Ohio teams as honorable mention selections.
Smith was honored in Division III while Whaley got his accolades in Division IV.
Whaley batted a lofty .451 on the season with 10 doubles, two triples, 33 runs batted in, 36 runs scored and 24 stolen bases.
As the team’s top pitcher who drew the toughest assignments, Whaley was 5-4 with a 2.07 earned run average in 54 innings. He struck out 68.
Defensively, he had just one error all season at shortstop in 41 fielding chances.
Whaley was all-district honorable mention as a sophomore, second team as a junior and first team as a senior.
A first team all-district selection this year and second team last season, Smith played in all 22 games this season and posted a .373 batting average with four doubles, three triples and 28 runs scored.
He also walked 10 times and was hit by the pitch six more.
As the leadoff hitter, Smith stole 37 bases and fell just short of the school’s single-season record of 42. He was only caught stealing three times.
Defensively, Smith played centerfield and some second base. He had 53 total fielding chances with only two errors for a .962 percentage.