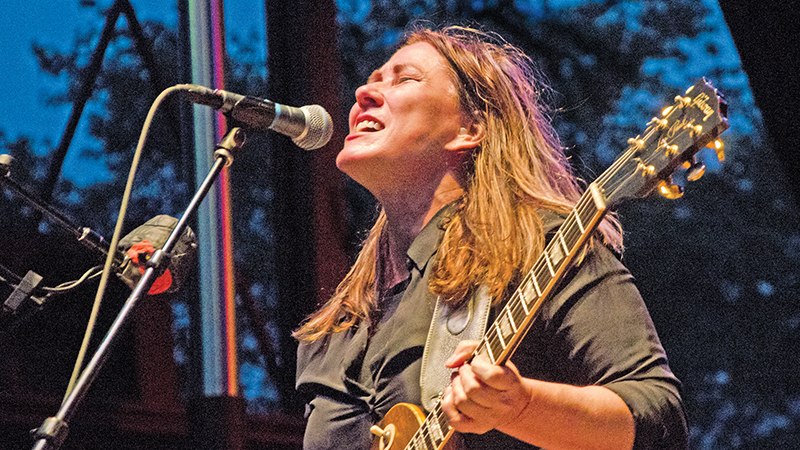 The Breeders perform at the Nelsonville Music Festival on Friday.

The Dayton-based alternative rock legends were headlining the second night of the Nelsonville Music Festival, as the event marked 15 years of operation.

Comprised of the Deal and her sister Kelly, the band began of a side project of The Pixies in 1989. They made references to their roots during the set.

“We drove down Route 35 to get here,” Deal said, before performing “Walking with a Killer,” from their latest album, “All Nerve,” with its refrain of ”through the cornfields of East 35.”

The four-day Nelsonville festival, the largest in southeast Ohio, featured headliners The Breeders, Death Cab for Cutie and Mavis Staples.

Others on the bill for the weekend included eastern Kentucky native Tyler Childers, Bully and Thee Oh Sees.

As part of the celebration, organizers opened the festival up to the wider public on Sunday by offering free admission on its closing day.

The Nelsonville Music festival was launched in 2005 by Tim Peacock, the managing director of Stuart’s Opera House, a historic theater located in town that serves as a host to concerts, films and theatre acts.

The first three years of the festival were a one-day event, before expanding to three in 2008, and later, four days.

In addition to music, the festival features a wide line of vendors, as well as local artists and performers.

The first year’s festival was held in Nelsonville Square, and organizers said the event has snowballed since.

Taking place on the campus of Hocking College in Nelsonville each June, the festival has grown to include top acts its headliners, with past performers including Willie Nelson, Wilco, St. Vincent, The Flaming Lips, Randy Newman, Jenny Lewis and the late Merle Haggard and Roky Erickson.