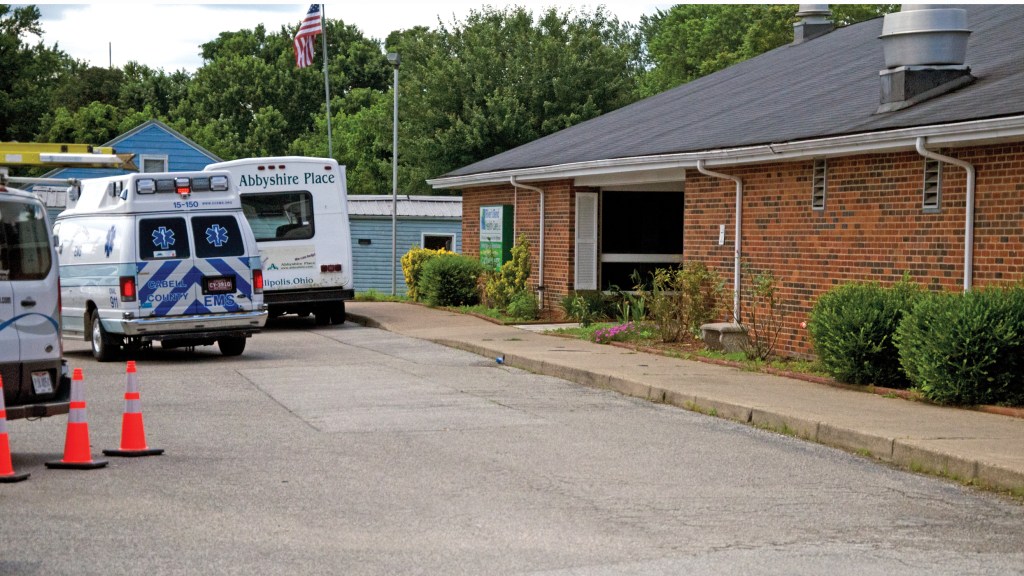 The Tribune/Heath Harrison An ambulance departs from River’s Bend Health Care on Friday. The Ohio Department of Health, along with a multi-agency team, has been relocating patients from the nursing home since its closure was announced Thursday.

Dept. of Health expects move to be completed Friday

The nursing home announced it was closing on Thursday, as it could not make payroll and the Department of Health mobilized an inter-agency team to help move the more than 50 residents at the home to other facilities in the region.

J.C. Benton, a spokesperson for the department, said they have been working with the Ohio Department of Aging and Medicaid to move the residents from the location at 335 Jefferson Avenue in Burlington.

“We have about 14 left to move,” he said. “And we expect that to happen before the end of the day.”

He said the nursing home should have contacted the department within 90 days of a closure.

Employees at the facility have said they have not been paid by the company.

Benton said remaining staff from the facility have assisted in the move.

He said any action that could possibly be taken against the facility due to the situation would have to wait.

“We would have to look into that after the dust settles,” Benton said.

Ursel McElroy, director of the Ohio Department of Aging, said the agency shared in the concerns the disruptions caused for residents and families.

She said all residents who have moved would have a personal meeting with an ombudsman and their families, to be sure their needs are met.

“We are working in a collaborative manner with one goal — to have all residents of River’s Bend safely relocated today,” McElroy said.

“We are grateful to the residents’ families who have also responded quickly and assisted with identifying alternate living arrangements, helping to pack and move their loved one’s belongings,” McElroy said. “We also acknowledge that several of River’s Bend staff members are working without compensation to provide care and assist residents during this time.”

The Tribune reached out to the River’s Bend Health Care, but they were unwilling to comment on the situation.