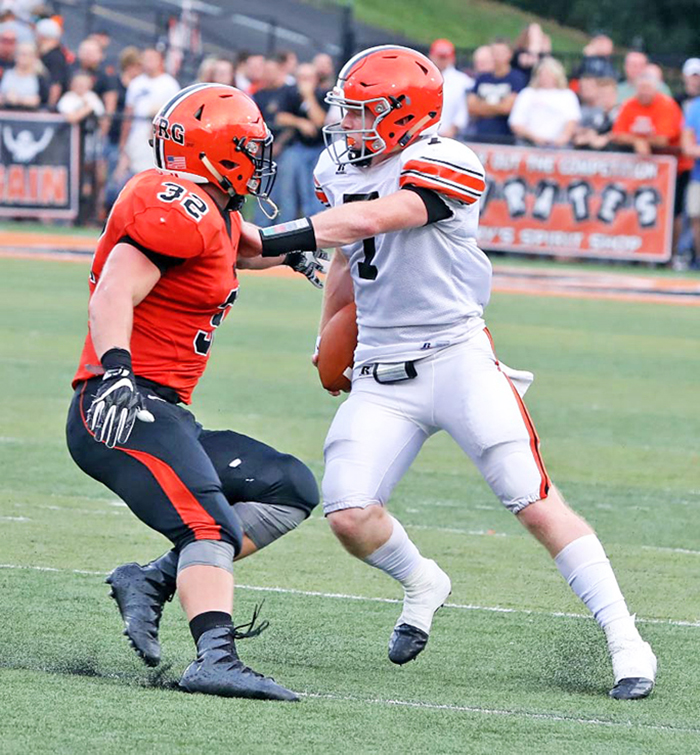 The envelope please. And the winner of the Gage Salyers’ college football commitment is…
The Youngstown State Penguins.
The list of potential suiters for the Ironton Fighting Tigers’ 6-foot-1, 195-pound senior quarterback was extensive.
Besides Youngstown State, Salyers got offers from Ohio, Ohio State, Pittsburgh and Eastern Kentucky. He had an invitation from Kentucky but opted not to attend.
But Salyers made his decision based on both hard-facts and intangibles.
“It’s like a family. They have a close bond there with everybody. Coach Pelini coached at a power five conference at Nebraska. He coached has a couple of championships. I thought it was a good move. It was basically like playing for a Big Ten team,” said Salyers.
Salyers call the secondary coach D.J. Gomes at 5:15 p.m. on Friday about his decision to commit to the Penguins.
“They recruited me as an athlete. But when I went up there this past Monday, they told me I could play quarterback or safety, just pick,” said Salyers.
“They run like a spread offense kind of like Ohio State and what we did my sophomore year,” said Salyers.
Last season, Salyers was 61-of-123 passing for 917 yards and 12 touchdowns and only three interceptions. He also ran 101 times for 531 yards and eight TDs.
A first team All-Southeast district selection and special mention All-Ohio, Salyers has shown improvement each season and has already shown signs of better things to come this fall.
“Going into to my junior year I worked winter, spring and summer on my throwing with Chris Smith and Jared Smith. I improved there.
“This year, I’ve improved at safety, getting out of my breaks. In the weight room, lifting has gone up a ton,” said Salyers.
Also, there has been an improvement in speed. Salyers had a 40-yard time of 4.62 seconds recently but said he ran a personal best time on a visit to Michigan.
“My fastest time is like a 4.58. I ran that in front of Michigan. That’s pretty much how I got my offer. The Michigan coach is from Youngstown and he called them and told them about me and they called an offered me,” said Salyers.
The commitment has caused a lot of relief for Salyers and he can now turn his focus to playing his senior season.
“It’s huge to be honest. You don’t have to stressed over it. I was thinking, what if another kid commits there. They can always say that spot is full. And just getting my college paid is big, too,” said Salyers.
The offer from Youngstown State runs deep in the family. Gage’s father Shane Salyers got an offer from then-coach Jim Tressel but elected to go in a different direction to play baseball at another school.
“It means a lot. Three years my dad would have won a (D-IAA) national champion. Instead he went to play baseball baseball,” said Salyers. “Andy Colegrove texted me and congratulated me. He asked me if I had any questions about the area.”
Colegrove was an All-Ohio lineman for Ironton who played at YSU from 2007-10.
The Penguins will start senior Nathan Mays this season. Whether or not Salyers gets to play as a freshman, he said there was one thing that caught his eye about the Penguins losing Mays.
“He wears No. 7. That’s pretty good. Hopefully, I can get that (jersey),” laughed Salyers who wears No. 7 for Ironton.
“They went through four quarterbacks last year because guys kept getting hurt.”