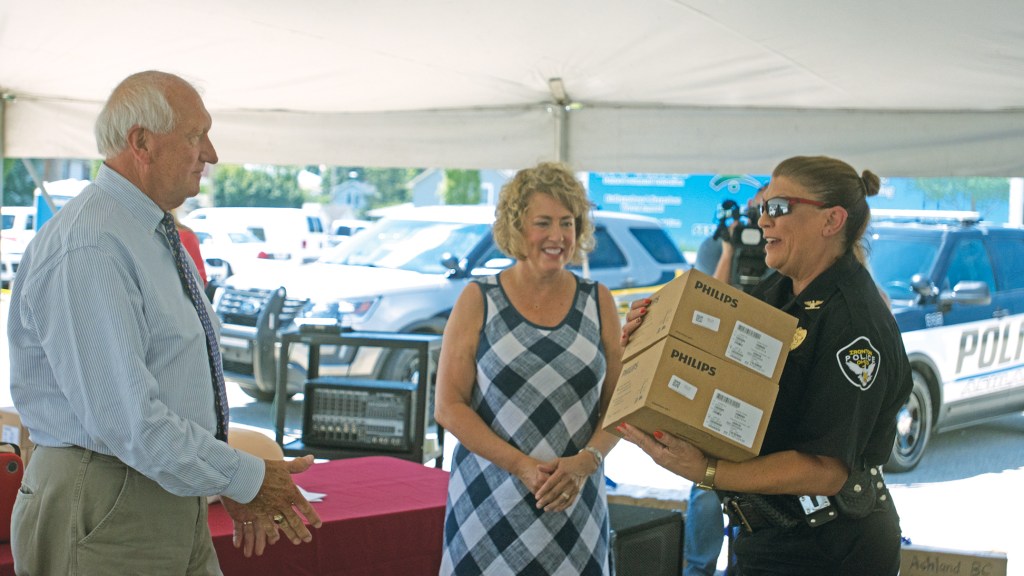 Automated external defibrillators can be used in case of heart attack

The machines are designed specifically for use by people who may not have a medical background or CPR training. The device tells people exactly how to attach the pads to a person and when to press the button to deliver a jolt or electricity or when to do CPR.

IPD Chief Pam Wagner was on hand to receive two AEDs, each of which came with pads for adults and small children, two batteries and a carrying case.

“It’s absolutely awesome, it is much needed equipment,” she said, adding that she is going to talk to Mayor Katrina Keith about where the devices would be placed. “We want to put them where they will do the most good in the City Center and our department.”

There is already one in the lobby of the City Center.

“It is lifesaving equipment,” Wagner said. “Hope we never need it, but it will be there if we do.”

Mona Thompson, vice president and chief compliance at KDMC, told the gathered police officers, sheriffs and school representatives that there were 25 AEDs being handed out.

“This project was a total team effort,” Thompson said.

“Altogether, we raised $21,260 for the KDMC Health Foundation,” Thompson said, adding they expected to be able to buy 10 machines, since they sell for about $2,000 for each AED kit. However, the KDMC purchasing team was able to get a better deal so that 25 kits could be purchased.

She added they hope to do a similar project next year.

Scott Hill, executive director of community engagement at KDMC said they are having two AED “round up days” for people or groups in the community that have AEDs. The machines can be brought to KDMC’s CPR training center and the devices will be checked to make sure it is working properly and the battery is still good. That will done from noon- 4 p.m. on Tuesday and 8 a.m.- noon on Wednesday. For more information, call 606-408-9297.