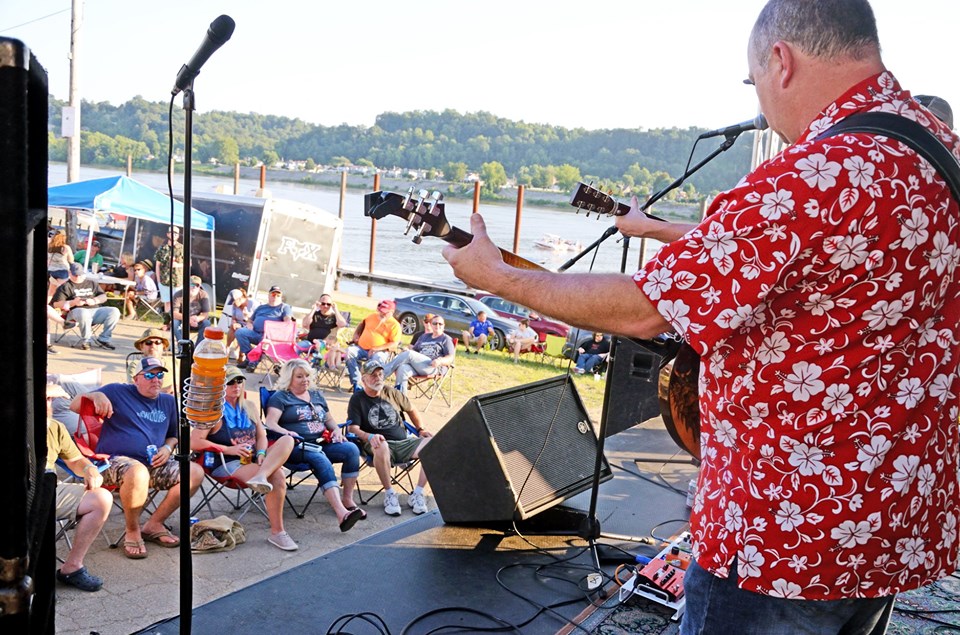 The inaugural of the Ohio River Revival took place on Saturday on the Ironton riverfront, bringing with it 12 hours of free music for the region.

Eleven bands from throughout the region played on stage, representing a variety of styles, while vendors sold food, beer, crafts, clothing and other items.

“It takes the doggone community,” founder Bob DeLong said from the stage. “It’s all about the folks. Give yourself a round of applause.”

DeLong, who had previously run the Appalachian Uprising festival, said he and his committee launched Ohio River Revival to spotlight the area’s music and to draw crowds to downtown. The festival is one of many events the group has planned.

Proceeds from the event were to go into preserving and restoring the floodwall murals where the festival took place.

“We want to make this riverfront beautiful for the community and as an entrance to our city,” DeLong said.

The event kicked off early in the morning with a yoga session by Huntington instructor Gina Hart-Smith, which followed the arrival of a group of kayakers, who made their way down the river from Coal Grove.

After that, the music began. While attendance was light in the initial hours, due the sweltering heat of the weekend, which exceeded 90 degrees, by the time the Coal Cave Hollow Boys took the stage in the evening and the sun was going down, the crowds were in place.

“Play one more,” a woman shouted at the end of their set, which DeLong arranged for the band, from Columbus, to comply.

“I guess the schedule isn’t too important right now,” he said, giving the well-received band a few more minutes.

There was music into the night, with headliner Town Mountain, of North Carolina,  wrapping things up around midnight.

The atmosphere drew all ages, with many families turning out.

M&M Party Central had several inflatables set up at the entrance, where children were playing.

“It’s going pretty good,” employee Cheyenne Hall said for the Ironton business. “And we have a busy summer up ahead.”

Among those in attendance were members of the El Hasa Shriners Hillbilly Clan 1 Outhouse 8, who were set up with their signature truck and selling raffle tickets for an Ohio State University football package.

“We’re to let them know were here for the kids,” Roger Morgan, with the group, said of their mission to raise funds for the Shriners hospitals.

He said the group is currently planning its upcoming Hillbilly Day at Pick‘n Save in Ironton, which will take place a few weeks from now and will include a hot dog sale in addition to raffle tickets.

Several vendors were set up as well, including Rowenna Mollett, owner of Dick’s Music Shop in Ironton.

In addition to sales, she said it was a way to gain exposure.

Not all of the vendors represented brick and mortar stores.

One was selling silver jewelry and other items.

“It’s all handmade,” Turtle, an Ironton resident, of Turtle and Gadget, said, adding that he operates his business online.

“It’s been going pretty well,” he said of the day.

DeLong said he was pleased with the turnout for the first year of the event.

“It’s been awesome,” he said. “I have no complaints, other than the heat. The music’s been great and everyone has been excited.”

He said he plans on bringing the festival back.

Video performances of many of the bands in the festival’s lineup can be found on The Tribune and Armstrong Cable’s Press Room Recording page on Facebook.