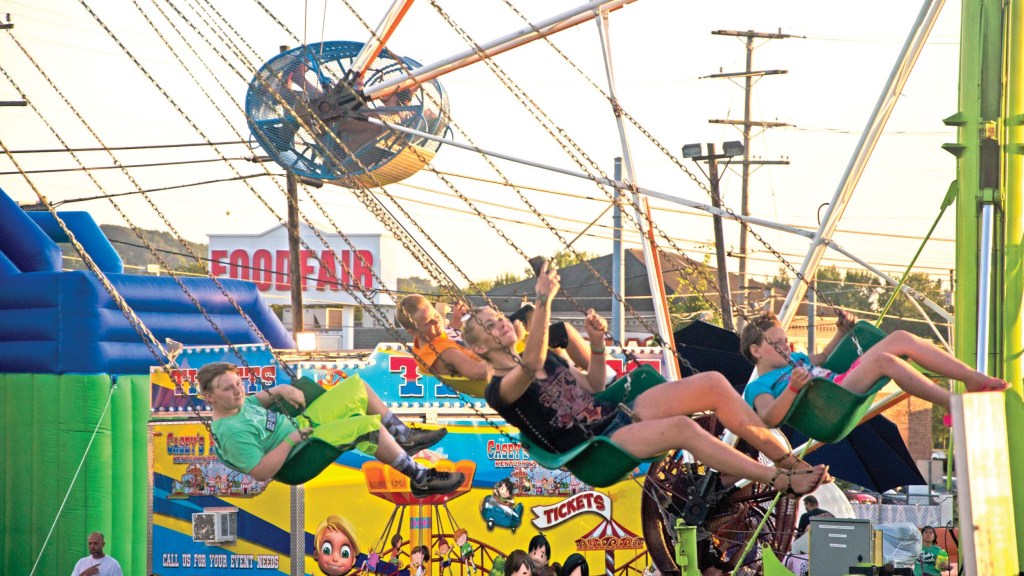 The Tribune/Heath Harrison Fairgoers enjoy amusement rides on the opening day of the 2018 Lawrence County Fair. This year's fair kicks off today.

ROME TOWNSHIP — The Lawrence County Fair got underway this morning.

Fair board president Randall Lambert said this year’s events will include several derbies and new attractions including a nine-foot tall robot.

“Those are very popular events, so we added one this year,” he said.

Tuesday will be the ever-popular Family Fun Day, with the Cincinnati Circus going on at noon and again at 5 p.m. At 8 p.m., the circus will have a fire show.

“We get a lot of families last year for Family Fun Day,” Lambert said. “It was amazing that so many families were here. It was neat.”

On Wednesday at 7 p.m., there will be a monster truck show.

At 7 p.m. on Thursday, the Kentucky Truck Tuggers will have its Outlaw Truck Tug-of-War.
“People always love to see big trucks pull against each other,” Lambert said.

And walking around the fairway will be an unusual sight, a nine-foot-tall robot named Max Power and his monster truck, Nitro. Max Power is also a mobile sound system that can interact with fairgoers.

“I think the kids will get a kick out of that,” Lambert said.

There will also be a petting zoo with pony rides and uncommon animals.

And the fair is, of course, the big week for the numerous 4-H members as the projects they have been working on all year are judged.

“Of course, we have the livestock shows in the evenings,” Lambert said.

He added that crews have been working to get the fairgrounds ready for thousands of visitors.

“The fairgrounds are really in good shape and it looks like the weather is going to be pretty good most of the week,” Lambert said. “So, we are looking forward to a busy exciting week.”