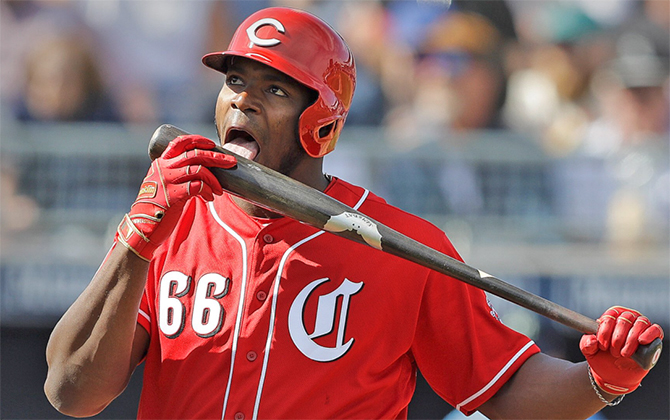 The Cincinnati Reds are 41-46 but only four and one-half games out of first place in the National League Central Division. Outfielder Yasiel Puig has had a strong first half but will be a free agent at the end of the season and the Reds must decide whether to keep him or trade him. Puig is a key to the Reds chances of making the postseason. (Courtesy of The Cincinnati Reds.com)

Your guess is as good as any.
There are a lot of questions surrounding the Cincinnati Reds and what they plan to do before the Major League Baseball trading deadline at the end of the month.
After a pair of losses to the Cleveland Indians on Saturday and Sunday, the Reds find themselves 41-46 but only four and one-half games out of first place in the National League Central Division.
“We’re there, despite the weekend,” said Reds’ starting pitcher and All-Star selection Sonny Gray, referring to a pair of losses on Saturday and Sunday to the Cleveland Indians.
“It was unfortunate to lose the last two games like that, but I think if you told us coming into the season that we’d be where we are, four and one-half games back of first place, I think we’d say, ‘Sign me up’ and we’d come out for the second half and fight every day.”
There has been a lot of talk and speculation surrounding right-fielder Yasiel Puig who will become a free agent at the end of the season.
Puig has been heating up the past few weeks and is hitting .257 but with 20 home runs and 51 runs batted in. He leads the team with 13 stolen bases.
The Reds knew about Puig’s status when they acquired him in a trade with the Los Angeles Dodgers in the offseason. The front office must ask itself if there is someone in the minor leagues such as outfielder Taylor Trammell who could adjust to major league pitching quickly and produce big numbers.
Mmmm, probably not just yet.
The Reds made a lot of offseason moves, mainly trying to acquire starting pitching. They accomplished that with the addition of Gray and Tanner Roark to go with All-Star Luis Castillo, Anthony DeSclafani and tough-luck starter Tyle Mahle.
“I think we’re definitely a contending team for sure,” said DeSclafani who has begun to hit his stride the past month.
“The standings don’t show what kind of team we are. Everyone in this division is right in the thick of it. Anything can turn quick. Going into the break, I think we’re in a good spot. We have to come out hot in the second half for sure.”
Besides Puig being in contract limbo, second baseman Scooter Gennett, shortstop Jose Iglesias and pitcher Tanner Roark can all hit the free agent market at the end of the season.
Gennett’s groin injury that has limited him to just 20 games and a .100 batting average could make him moveable, but he really would be a huge asset if he could get healthy. After all, he’s less than a year removed from being the runner-up in the NL batting race.
The Reds still have Jose Peraza to play shortstop, rookie Nick Senzel has played and hit well as the everyday centerfielder but could easily shift back to his original position in the infield, and minor league prospects like third baseman Jonathan India and outfielder Jose Siri are reportedly being considered as trade bait.
The Reds might be looking for more help in an overworked bullpen. Closer Raisel Iglesias has 16 saves but has been shaky too many times as his 2-7 record would indicate.
Buy or sell? That’s the question facing the Reds and other contending teams. A fire sale at this stage of the game just tells fans we’ve failed again so keep your money and stay home.
Since the Reds management made such a big deal about trying to win this season and — despite the losing record — are in the thick of the race, it would make more sense for them to keep Puig and company and roll the dice.
And let’s hope for “seven” and not snake eyes.
———
Jim Walker is sports editor of The Ironton Tribune.