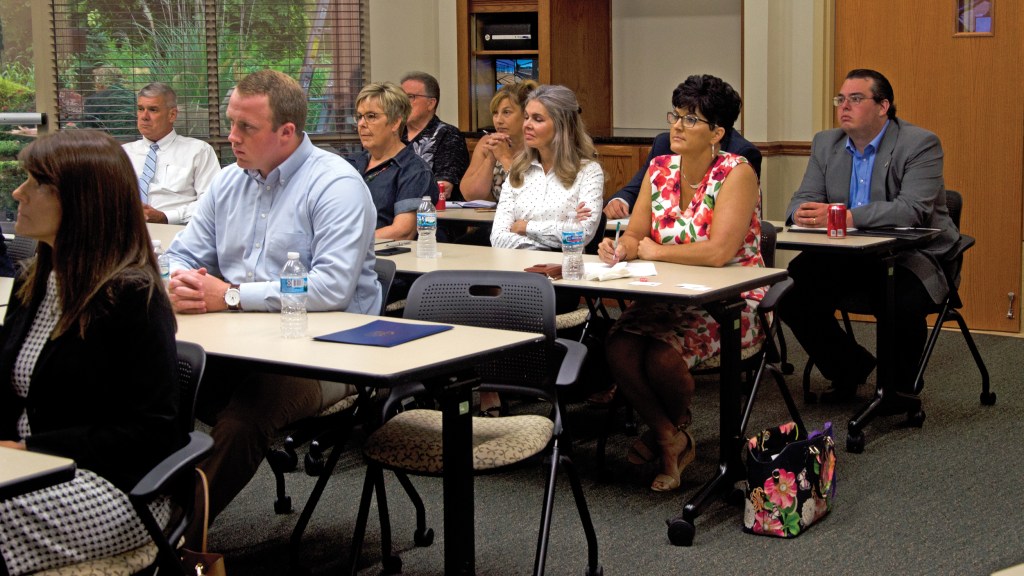 South Point Mayor Jeff Gaskin and Ironton Mayor Katrina Keith were among 30 officials who gathered for the monthly meeting of Mayors Partnership for Progress at the Lawrence County Chamber of Commerce in South Point on Thursday. (The Tribune|Heath Harrison)

SOUTH POINT — The Mayors Partnership for Progress hosted its monthly meeting on Thursday at the Lawrence County Chamber of Commerce.

In addition to Ironton Mayor Katrina Keith and South Point Mayor Jeff Gaskin, about 30 mayors from southeast Ohio, as well as local and state officials, attended the event.

As director of The Point Industrial Park, Clay gave the room an overview of developments at the site in the last year.

This included the opening of HarbisonWalker International’s new refractories plant, which Clay said they were able to complete in about seven months.

“When we have a job that big, we work on it seven days a week,” he said. “That’s what it takes for our county to be successful.”

Clay also talked about the new Keurig/Dr. Pepper facility, which will host its ribbon cutting on July 30.

Outside of The Point, he discussed developments for Ironton.

While he said businesses are reluctant to open in downtown areas, due to safety issues and not wanting to drive through residential areas, he pointed to the development of the Gateway Center and the new facades for structures downtown such as the Kresge building.

Clay said his biggest job is to “sell our community” to potential new industries.

“And once I can get them to come here, I can hook them,” he said.