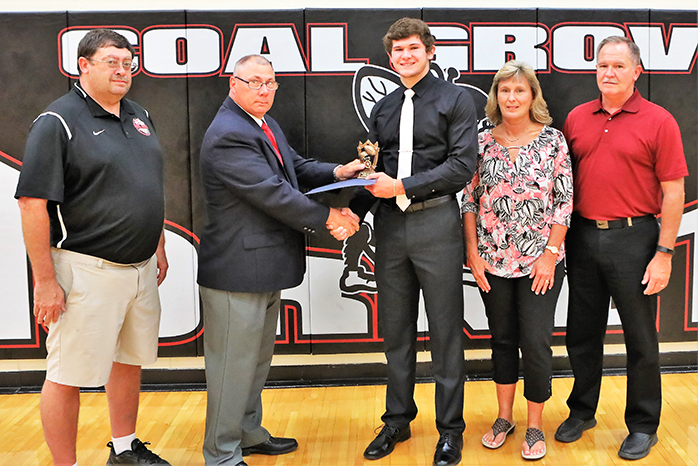 Coal Grove Hornets’ senior athletic standout Nate Harmon was the recipient of an academic scholarship. Harmon received the James J. “Bear” Mains Scholarship given by the Southeast Ohio District Athletic Board. The scholarship is worth $1,000. Attending the presentation of the award are, from left to right, Coal Grove athletic director Bryan Mulkey, Southeast Ohio District Athletic board representative Rick Barrett, Nate and parents Lisa and Mark Harmon. (Photo By Tim Gearhart)

COAL GROVE — Nate Harmon had his own version of the TV game show “Paid Off.”
The show awards cash for contestants to help pay off their student loan debt.
Harmon — the Coal Grove Hornets’ all-around athlete who recently graduated in May — has a head start on paying his college debt.
Besides signing to play football at Georgetown University in Kentucky, Harmon got an added bonus when he was the recipient of the $1,000 James J. “Bear” Mains scholarship presented by the Southeast Ohio District Athletic Board.
The Ohio High School Athletic Association annually provides scholarships for outstanding student/athletes from its member schools. Each school may submit one senior male and female candidate for consideration.
In addition, schools may submit one senior female and male as a minority candidate.
To be nominated, a student must be a graduating senior, have a 3.25 grade point average or higher on a 4.0 scale, have taken either the ACT or SAT, received a minimum of three varsity letters in one OHSAA sanctioned sport or four varsity letters in a combination of any two or more sanctioned sports.
The OHSAA provides 48 scholarships throughout the six athletic districts with 36 students receiving $1,000 awards and one minority scholarship in each district.
The remaining scholarships are awarded proportionately to the number of schools in each district.
Harmon lettered in football, basketball and baseball. He was first team All-District in football the past two seasons while also earning All-Ohio honors and first team All-Ohio Valley Conference first team awards.
Harmon was a starter for the Hornets’ basketball team that set a record by winning back-to-back district titles for the first time in school history.
The SEODAB scholar/athlete banquet was held June 24 in Jackson.