Market report: 4-Hers auction their animals on final day of fair 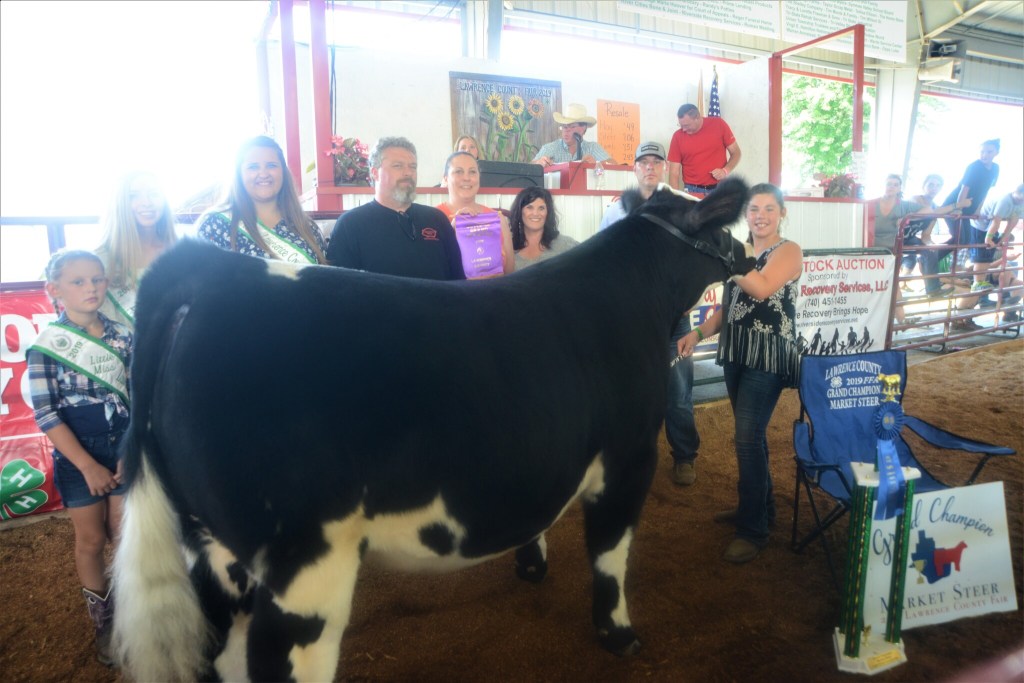 Marley Ferguson, of Starlite 4-H Club, sold Oreo, her her grand champion, 1,332-pound steer, for a total of $7,326 to Riverside Recovery Services at the closing auction at the Lawrence County Fair on Saturday. (Kayla Niece| For The Tribune)

ROME TOWNSHIP — The final day of the Lawrence County Fair started by 4-H animal projects being auctioned off to the highest bidder.

The auction represented the end of this year’s hard work for a lot of the 4-Hers. In many instances, they raised the animal since it was young and spent a lot of hours working with the animal so it would do well in judging. A few of the younger kids cried before they entered the show ring, but smiled at potential bidders and held their heads high.

The auction started around 10:30 a.m. on Saturday, with Market Hogs.

Lewis was happy with the results.

“I appreciate the buyer,” she said. “It was a lot of hard work. I didn’t think I was going to be grand champion so that was exciting.”

As for the money, it is going to be saved for a good education.

He too was happy with the sale price.

“Raising a hog is a lot of hard work,” he said. “You have to walk them so they walk well at the fair, you have to feed them. It’s worth it.”

Next up were the Market Beef.

“I’m very happy with the sale. But I am sad to see him go, though, because he is a very good cow,” she said, adding that he was named Oreo.

She said she might get another steer and put some away for her education.

Chad Morris, of Starlite 4-H Club, was next in the ring with his 1,318-pound reserve grand champion steer. It went for $5 a pound, for a total of $6,590, to Jim’s Farm Equipment, Guy’s Floor Covering, Citizens Deposit Bank, Central Hardware and Furniture and Jerry Rowe.

“I’m happy as can be,” he said of the purchase price. “I put in the hard work to take care of these animals, day in and day out, for the better part of a year. It’s just very satisfying to get reserve champion.”

The lambs were next in the ring, with Gracie Daniels, of the Over Yonder 4-H Club of Lawrence County, and her 138-pound grand champion lamb. It went $10 a pound, a total of $1,380, to Guy’s Floor Covering.

“The price was actually pretty good,” she said. “I didn’t expect to get that much. We didn’t rack up our buyers this year. So, it went pretty well.”

She and her brothers put their money in a bank account to go towards college or the purchase of a vehicle.

“We’re not allowed to touch it until we really need it,” she explained.

Next in the market ring was Haley Pancake, of the Over Yonder 4-H Club of Lawrence County, and her 122-pound, reserve champion lamb. It went for $1,342, or $11 a pound, and was purchased by Guy’s Floor Covering, Lawrence County Commissioner DeAnna Holliday and Jerry Rowe.

She agreed that the prices were good but a little down over last year, when she got $21 a pound. But she was happy with the sale.

“The market is down, so there aren’t just as many buyers,” she explained. This was Pancake’s 10th and final year showing at the Lawrence County Fair.

“I had a good 4-H career,” she said, adding she will probably volunteer to help out next year.

In the goat sale, Mary Back, of Farm Hands 4-H Club, got $20 a pound for her grand champion goat. The total was $1,660 and the purchasers were Guy’s Floor Covering, Lawrence County Commissioner Freddie Hayes, McDonald’s of Lawrence County, Jeff Haley For 93rd District State Representative and Larry Kirkpatrick.

Isabella Kerns, of Over Yonder 4-H Club of Lawrence County, also got $20 a pound for her 68-pound, reserve champion goat.

Kerns said she was happy to win reserve in the goat class.

“He did really good and I’m just really proud of my goat,” she said. “I’m happy with the auction results.”

In the poultry sales, Wyatt Stallo, of the Greasy Ridge Gang 4-H Club, got $1,200 for his grand champion chicken.

“I was happy with that,” he said. “It’s pure profit, it doesn’t cost a lot to raise a chick. I’m going to put the money in the bank.

Noah Hessler, Symmes Valley FFA, was surprised to get $1,900 for his reserve grand champion chicken.

He said he plans to use the money towards buying a vehicle.

“I’ve been very happy with this week,” he said. “It’s been the best week of my life.”

Sarver said he was happy with the sale.

“I wasn’t expecting that much, because this is my first being grand champion,” he said. “I was surprised to win and I’m going to try again next year.”