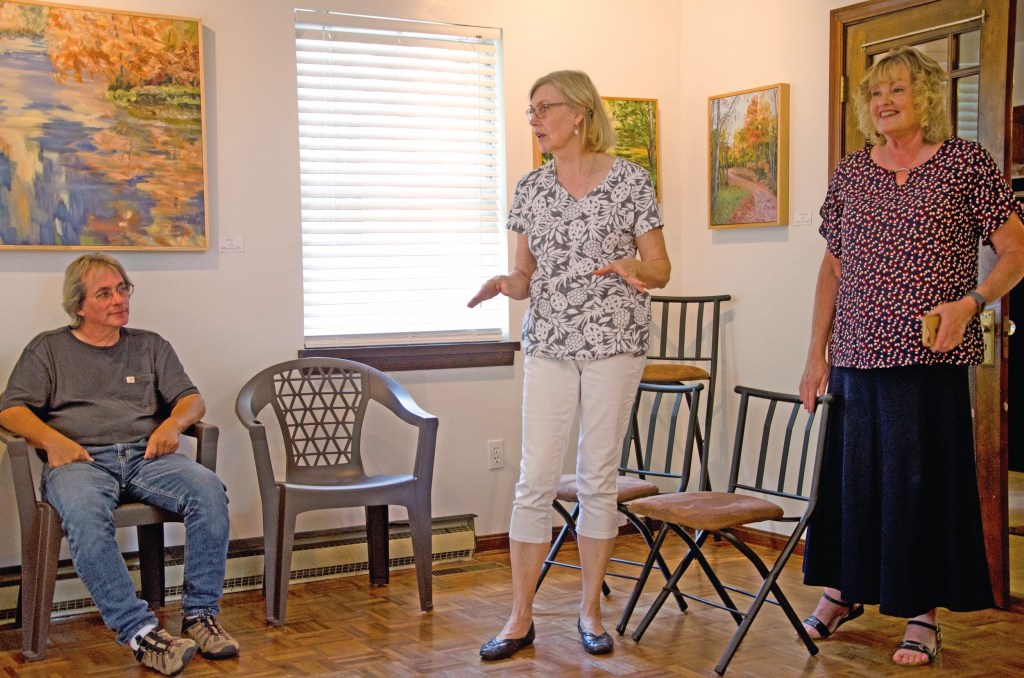 Artist Laure Williamson talks about her oil paintings during an opening reception for the “West Virginia: A Clear View” exhibit at the Hutton Wayfarer Gallery in South Point on Saturday. (The Tribune|Heath Harrison)

The artist, who splits her time between Hinton, West Virginia and Baton Rouge, Louisiana, has several of her paintings on display in “West Virginia: A Clear View,” a new show at the Hutton Wayfarer Gallery in South Point.

An opening reception took place on Saturday for the exhibit, which features oil depictions of locations around the state, such as the Greenbrier River and Sandstone Falls, on the New River.

Williamson, who formerly taught at Marshall University, Shawnee State University and University of Louisiana, says, while she has worked on location for some pieces, she typically works from a small setup in her bedroom, using photos taken of the subjects.

While the paintings are realistic and representational, there are flourishes of style in the reflections on the water and the light through the tree leaves.

“It’s a little freer and I have more fun with it,” Williamson said of those parts.

In addition to oils, Williamson has also worked in pastels. She has taught courses on color theory, drawing, figure drawing and painting.

“Exploring the environment and landscape and depicting it as see it, expresses a sense of place,” she said in her artist statement. “This is present in capturing of the waterways, mountains, swamps and animal life that surround me.”

In addition to Williamson’s work, which will be on display until Aug. 17, the gallery has also rotated some of the work in its collection by co-owner, former Marshall University instructor Robert Hutton, with a new series of small paintings on display that the artist said he recently discovered in his archives.

The gallery, which he runs with his wife Robin, is open to visitors Monday through Saturday by appointment, which can be set up by emailing rhutton@zoominternet.net. It is located at 52 Private Drive 250, off County Road 144.

The next guest artist exhibition will be the ceramic and painting work of Homaira Ahmed, of Teays Valley, which will have its opening reception from 3-6 p.m. on Saturday, Aug. 24.