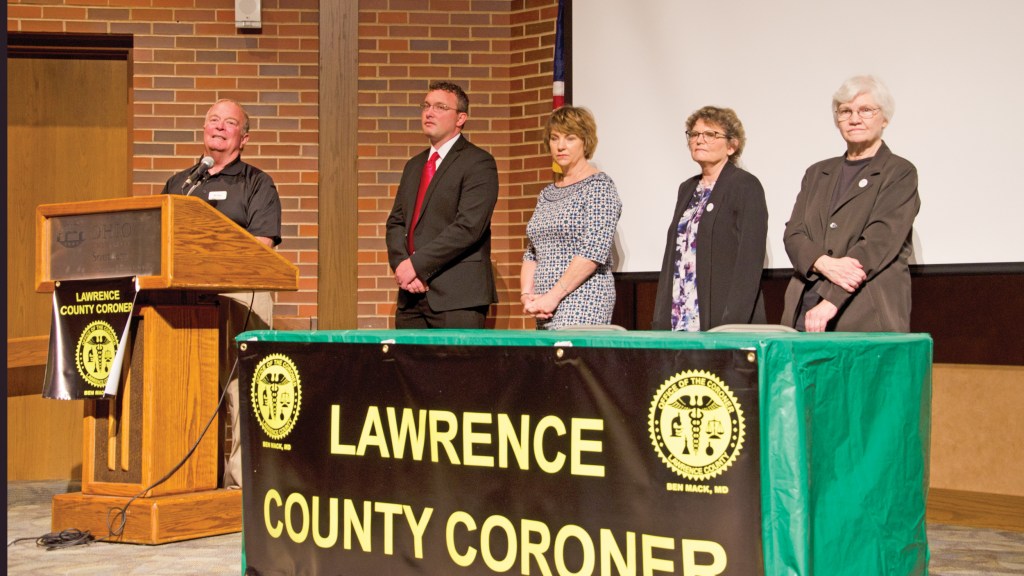 Lawrence County investigator Bill Nenni speaks alongside the team that helped to identify the “Belle in the Well” at a news conference on Monday in the Bowman Auditorium at Ohio University Southern. (The Tribune | Heath Harrison)

On Monday morning, Lawrence County Coroner Ben Mack hosted a press conference to reveal the name of a woman who had been found in a well in April 1981. The woman had no identity and no one claimed the body, so she became know as the Belle in the Well.

The conference was held in the Bowman Auditorium at Ohio University Southern in Ironton. Besides Mack, speakers included several people who helped use DNA to determine that the woman was named Louise Virginia Peterson Flesher, she was 65 years old when she was strangled to death sometime between late 1979 or early 1980 and she was born in Fairview, West Virginia, some three hours from where she was found in a cistern near Chesapeake. She had been living near Las Vegas and her family didn’t know when she left or where she had gone.

Bill Nenni got the case of the woman in the well when his father, Coroner Harry Nenni, assigned it to him.

Because of the amount of time the body was in the well, it was originally thought the Belle was around 30 years old. The spot where the body was found was used as a party place by a biker group and for years, it was thought there was a connection.

“But since she was 65 years old, that probably didn’t have a lot to do with motorcycles at that time,” Nenni said.

Many of the people that knew Flesher have since died and none of the living relatives were at the conference.

“All of this family is very estranged,” he said. “And the living people have asked to remain anonymous.”

He said they had very purposely not named the living relatives and asked the media to respect their privacy.

“They don’t want to be involved in this,” Nenni said.

The only photo investigators could find of Flesher is her graduation photo from 1934.

Flesher lived in Fairview, West Virginia with her mother and grandparents until at least the age of 5. Between 1933 and 1942, she lived in Casper, Wyoming and Cheyenne, West Virginia. She had three daughters, all of whom live or lived in Wyoming. Her husband died in 1992 in Belpre, Ohio.

Flesher returned to West Virginia by 1944 and was living in Parkersburg, West Virginia until at least 1956. At some point, she was living near Las Vegas and sometime between 1979 and 1981 she came back to this area.

A relative noticed that she was no longer cashing her Social Security checks but had no way of contacting her.

Lawrence County Sheriff Jeff Lawless said that the case of the Belle in the Well was something of legend when he started as a deputy in 1986.

“It was one of those cases you talk about year after year after year. You always want to find out who the person was,” he said. “We don’t want to leave any case unsolved.”

He said that after nearly 40 years, the chances of finding who killed Flesher were not likely. There was no physical evidence left in the well, but they still hope to solve the murder.

“A murder case doesn’t have a statute of limitations,” Lawless said. “So, it will go on until we can find somebody to bring to justice. The amount of time that has passed by, the lack of physical evidence may prevent us from ever knowing who killed this lady. But this case is still certainly open.”

He said that if anyone has information about this case, they can call an anonymous tip line at 740-532-3525 or email helpthesheriff@lawsoco.com.

“Will we ever know who committed the murder? I don’t know. But, I didn’t think we would ever know who this lady was. So it is possible.”

‘Belle in the Well’ name revealed