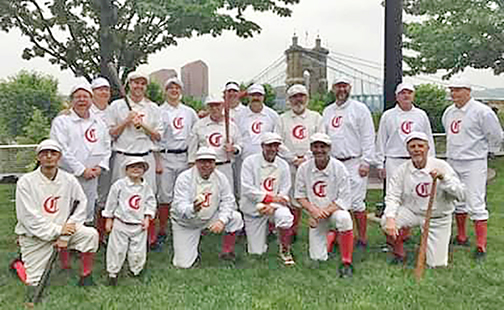 The Vintage Cincinnati Reds’ baseball team will play an exhibition game at 3 p.m. on Sunday in West Portsmouth. The team will play by 1869 rules to help in the 150th anniversary of the Reds who were baseball’s first professional team. (Photo Submitted)

PORTSMOUTH — Now this is what you call a birthday party.
It’s the 150th anniversary of the Cincinnati Reds — baseball first professional baseball team — and part of the celebration includes the Reds’ 1869 Vintage Team and that will play a vintage game at 3 p.m. Sunday in West Portsmouth.
The game will be played at Earl Thomas Conely Park on Route 52 next to Portsmouth West High School.
The game utilizes rules from 1969 with no gloves, no strikeouts and no stealing.
Fans should bring a lawn chair and enjoy the game that brings the game back to the Portsmouth area where the original team played at Riverside Park which was located on the west side of Spartan Stadium.
The Red Stockings rolled to a40-0 win during that inaugural season that saw them post a 57-0 record.
The Vintage team has been traveling throughout the Cincinnati area, demonstrating what baseball was like 150 years ago.
In 1869, the Red Stockings were brought in by boat on the Ohio River and the team stayed in a home which today is known as the 1810 House in Portsmouth.
There will be souvenir items for auction from the Reds’ Hall of Fame and Museum.