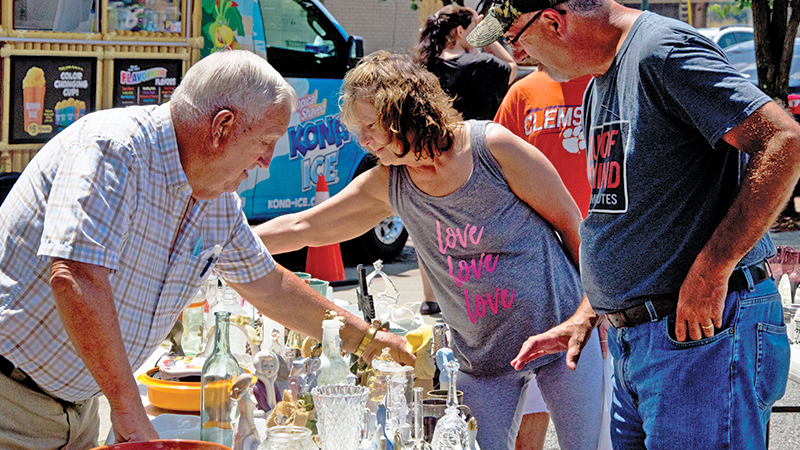 Ironton hosted its citywide yard sale on Saturday and downtown especially saw a lot of activity on Saturday.

Up at The Ironton Hills shopping center, the El Hasa Shriners hosted Hillbilly Day at Pick’n Save, while, later in the day, on Center Street, a Market After Dark took place at Fifth and Center by The Vault Market.

Down at the farmers market, several people had set up on the lot as part of the yard sale.

“It’s been a good turnout,” Sam Heighton, chair of Ironton alive, said. “It always is.”

He said the lot had been full of yard sale vendors at the start of the day and that many of the regular sellers at the farmers market had items at their booth that they had purchased from the yard sale.

The farmers market will continue to host its Tuesday Summer Concert Series through the end of the month, with Larry Whitt scheduled for this week, Heighton said.

On Park Street, motorists encountered members of the Upper Township Volunteer Fire Department, who were conducting a fundraising boot drive at the intersection in front of Advance Auto Parts.

He said those who missed the drive, but are interested in donating to the effort can contact the fire station.

And over on the Advance lot, the Rock Hill High School girls volleyball team was raising money through a car wash.

“This is our last fundraiser of the season,” coach Michelle Aldridge said.

She said the money raised would go to team-building efforts and that anyone who wants to make a contribution can send a check care of the Rock Hill Athletic Boosters to the school.