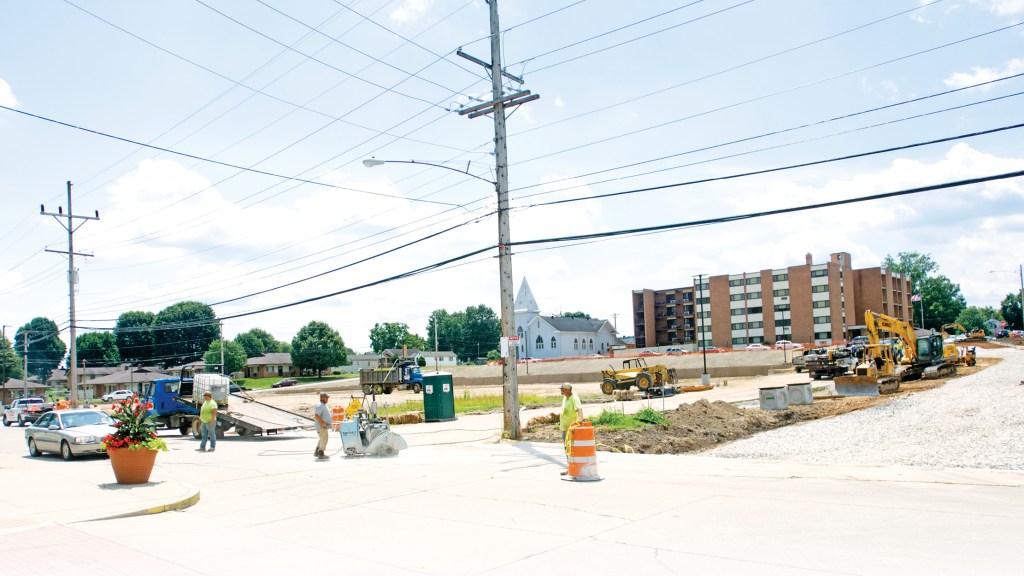 Crews work on streets in Ironton in front of the site where Marriott TownPlace Suites hotel is being built. The hotel is expected to be completed by the summer of 2020. (The Tribune|Mark Shaffer)

New Marriott should be completed in 2020

People driving by the Gateway Center in Ironton will probably notice the beginning of a new construction project, a Marriott Town Suites hotel.

The project was announced two years ago. MPH Hotels is building the hotel to cater to traveling business people who want a long-term stay in a room with amenities.

The Marriott Town Suites will be a five-story building with 76 rooms, an indoor pool and an exercise room. It is geared more towards long-term stays with bigger beds, full-size freezer and refrigerator, smart televisions and stovetop burners.

It is a $15 million project for the company and its investors, plus another $1 million from grants for infrastructure such as sewers.

Ralph Kline, the assistant executive director of the Ironton-Lawrence CAO, said that crews are working on street relocations from Washington Street, sidewalks and a pad for the building. He added they should be starting on the footers soon.

“From there, they are looking at building a story a month. Hopefully, it will all be under roof by the end of the calendar year,” he said. “I think the goal is to have it up and operating in about 12 months. I think they are aiming for summer of 2020.”

Kline said it took awhile to start construction because they needed to get financing in order, timing with bonding and notifications.

“There are always changes in the financing world, so some of the original delays were created by grant funding and some of the things had to do with environmental reviews and additional studies, which in turn, created a delay on down the line,” he said. “But we got through it.”

MPH Hotels decided to build a second hotel in Ironton after the success of the Holiday Inn Express they built about five years ago. The company said that, despite the hotel having 79 rooms, they often have to turn people away because all the rooms are booked.

“We’ve been working to promote travel tourism, really focusing on those short-term weekend trips and tying in with our recreational aspects like Wayne National Forest,” Kline said. “This allows us to help promote that and bring more travel tourism to the area.”

He said it would also tap into the flow of people taking the new Portsmouth Bypass.

“Room rentals have gone up with people just passing through the area has gone up significantly,” he said. “So, it will allow us to capture more of that market.”