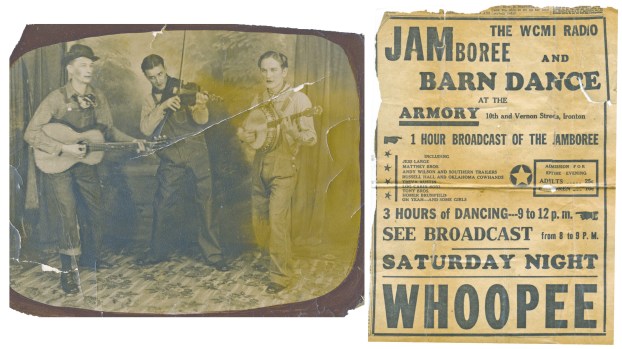 A young Jesse James Large is seen at the right with a banjo, although he was a fiddler, circa 1920. His family is looking for any existing recordings of Large so they can be compiled for an album release.

Family seeks recordings: Jesse James Large, of Ironton, was an influential fiddler in the 30s and 40s

It’s hard to imagine now, but there was a time when if you wanted to hear music you had three choices — listen to a record, listen to the radio or go see a band.

Back in the 30s and 40s, one of the biggest draws in the Tri-State and beyond was fiddler Jesse James Large, who performed under the name Jess Large. He lived on Route 104 in Ironton and was a huge influence to other fiddlers in the region.

His band would sell out dance places like the Armory in Ironton, the Pavilion in Pine Grove and St. Mary’s Pavilion. He taught others how to play in the Irish/Scots tradition and wrote songs that other artists performed.

Now, his granddaughters are trying to find any recordings of the music he performed.

Tamara Large-Ryles, of Winchester, Kentucky, and Teri Large-Wells, of Rush, Kentucky, are trying to find any existing recordings of their grandfather in an effort to put his legacy before the public and have interest from Rounder Records and a museum, if they can find something that he recorded.

“We’re looking for any information from anyone who knew him, any stories” said Large-Ryles.

“Anything,” Large-Ryles said. “Go to your grandparents, they probably remember those dances.”

The granddaughters said that Large was known for both his talent and being a bit of a rascal.

Large played a lot of radio shows back in the 30s, 40s and 50s, as the stations often had local and touring bands come in and play live in the studio. He also made some records.

Large-Ryles unhappily recalls a family story of how at one gathering, the party got a bit out of hand and they “threw the record up in the air and shot them.”

“But I am sure there are records out there, I’m sure someone has them” said Large-Ryles.

She said they have been in talks with Rounder Records.

“But there isn’t a lot they can do without any recordings,” she said. “We don’t have any, which is ridiculous, but it was a long time ago. So, we just have to chase these down, which is what we have been doing for a long time.”

They wonder if there was someplace locally that would have recorded Large and his band or if there are any radio recordings that survived after all this time.

“There has to be something left in someone’s attic or basement,” Large-Ryles said.

And they have talked to the Old Time Fiddler’s Association about getting their grandfather in the museum, but again the lack of recordings is holding things up.

“There is a lot we don’t know about him, because we weren’t allowed to know him well,” Large-Ryles, citing family issues and probably because of his musician’s lifestyle.

“But he was a really wonderful fiddler,” Large-Ryles said. She also described Large and his brothers, who played with him as “rascals.”

“They pretty much stayed in trouble,” she said. “When they showed up, it was a party.”

“We have just gotten to the point where we are taking this seriously,” Large-Ryles said. “There are so many people in our family that are wonderful singers and players and Terri and I are trying to bring his songs back.”

There are some recordings of Large’s works by other artists.

Large-Ryles said this area was important to Rounder Records and they made several field recordings of people who played fiddle and other instruments to document the music that was transplanted into the hills of Appalachia by people who came from places like England, Ireland and Scotland.

“It was a dancing kind of fiddling, more than anything else,” Large-Ryles explained. “They had their own signature sound.”

There is a field recording of Arnold Sharp, a colleague of Large’s known as “Fiddlin’ Andy,” that has him playing a tune called “Jess Large’s Going Back to Pine Creek.” And the name is a misspelling of Pine Grove, which is just outside of Ironton.

“When another person does a song, they can call it whatever they want,” Large-Ryles explained. She said many of Large’s songs are played by fiddlers, although they may not know who wrote it.

Large was an influence on other fiddlers like Sharp, Asa Neal, Forest Pick and Jerry Deer, JP Fraley and more.

“They brought this music to this area,” Large-Ryles. “In a lot of ways, it was a precursor to bluegrass. These guys brought it in through this folk music.”

“My grandfather, his life was the fiddle,” Large-Wells said. “But he was diagnosed with a brain tumor and he lost his ability to play the fiddle. He lost his knowledge and his ability. He decided if he couldn’t do that, it wasn’t worth being alive.”

“He died before his time,” Large-Ryles said.

If you have any information, you can either go to the Facebook page, Fiddlin Jesse James Large or leave a message at 859-644-2949 or email teriwells@gmail.com.

U.S. 52 interchange to close: Repairs to be made in the area of roundabout

The U.S. 52 Eastbound interchange is going to be closed for a week in late August so repairs can be... read more