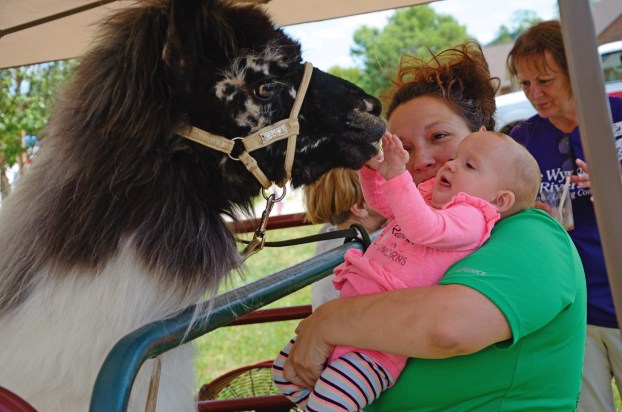 Attendees of the Wyngate at RiversEdge fifth anniversary celebration on Saturday meet Angel from the Good News Llamas, owned by Tom and Judy Ross, of Chesapeake. (The Tribune | Heath Harrison)

ROME TOWNSHIP — For the past five years, the Wyngate at RiversEdge has provided a community where seniors can live both independently and through assisted living.

And on Saturday, the facility marked the anniversary of its August 2014 opening with a party on its riverside patio.

Residents and the public were treated to music from Chase Jobe, of South Point, and the Razzle Dazzle Quartet, from Huntington, as well as food from the Crown City and Proctorville Masonic lodges, beans by Dan Fulks, and others.

Julie Poff, the activities director for the Wyngate, said it was all about giving back to the community that has supported them.

“And all of the people helping today have given to us,” she said.

The event was free and open to the public, like many of the Wyngate’s monthly events, such as its farmers market, chilifest, holiday breakfasts and others.

Saturday’s activities also served as Mayberry Day, themed around “The Andy Griffith Show.” It is a recurring summer event for the facility.

A vintage police car was set up, and the crowd was treated to a visit from Barney Fife.

Indoors, in the dining room, episodes of the show played for residents.

The Gideons had a booth set up, distributing Bibles, while Tom and Judy Ross, the owners of Good News Llamas were on hand with two of their animals, allowing attendees to feed and pet them.

The Chesapeake couple also owns Back Porch Fibers, which sells yarn, clothing and other items made from the hair of the herd they keep on their farm.

Judy Ross says they are gearing up for their next event, taking part in the second annual Bringing the Farm to You, set for Sept. 29 at the Lawrence County Fairgrounds.

The event, which spun out of the county farm tour, showcases agriculture in Lawrence County and will feature a variety of vendors and demonstrations.

The Wyngate also has a facility in Barboursville, West Virginia, which opened several years earlier.