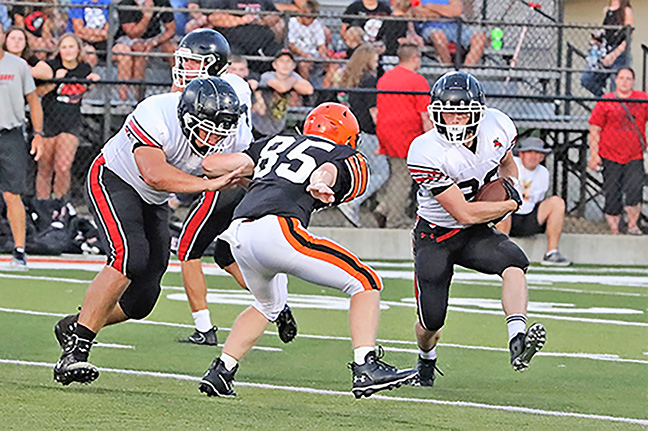 Ironton Fighting Tigers’ senior defensive end Bryce Munion (85) closes in as he looks to make a tackle in the OVC preview. (Photo By Tim Gearhart)

It’s that time.
The new high school football season is at hand and with the first week of games that means it’s time for the Ironton vs. Wheelersburg rivalry.
The venue switches to Ironton’s Tanks Memorial Stadium on Friday night for a 7 p.m. kickoff between two teams geared for good seasons that should put them in the playoffs again.
Ironton leads the series 17-13 but the Pirates have won eight straight including playoff wins in 2014 and 2015.
The Pirates lost some key players from last season including quarterback Trent Salyers and wide receiver Tanner Holden.
Quarterback has been a question mark position for the Pirates and was muddled even more when front-runner Matthew Miller suffered a season-ending injury in the preseason.
The Pirates shifted gears and took senior wide receiver Makya Matthews (5-9, 175) and moved him to quarterback to give then a speedy duel threat player.
His top receivers will be veteran senior L.J. Payton (6-0, 130) and junior Ian Fannin (5-10, 130) and senior Adam Vastine (6-0, 165).
Leading the ground game is sophomore Carson Williams (6-0, 165).
Senior Evan Horsley (5-10, 205) can play running back, wide receiver and tight end.
“Makya Matthews and Evan Horsley are guys who have contributed since they were sophomores,” said Pirates’ coach Rob Woodward.
There are several players battling for the tight end job including senor Lane Charles (5-11, 215), junior Gage Adkins (6-1, 175), senor Corey Maxie (6-6, 211) and junior Cameron Griffey (6-2, 225).
The key to the offense may be the offensive line that had a veteran group returning plus plenty of depth to keep players fresh.
“We have a lot of depth (on the offensive line) we feel we can utilize. There’s a lot of experience,” said Woodward.
The center should be senior Gavin Welch (6-3, 265) who will be flanked by senior Ethan Goode (6-4, 220) and junior Blake Richardson (6-3,295) at the guards.
Senor Drew Blair (6-0, 215) is the right tackle with senior Caleb Johnson (6-1, 200) his running mate on the left side.
The top backup figures to be senior Brady Warner (6-0, 225) who can play several positions.
Sophomore Braxton Sammons figures to be the placekicker.
Ironton returns several starters from last season including its entire All-Ohio backfield of senior quarterback Gage Salyers, senior fullback Seth Fosson and junior tailback Reid Carrico
The key for Ironton will be on the defensive side with Fosson and senior Junior Jones at the ends and junior linebackers Cameron Deere and Carrico.