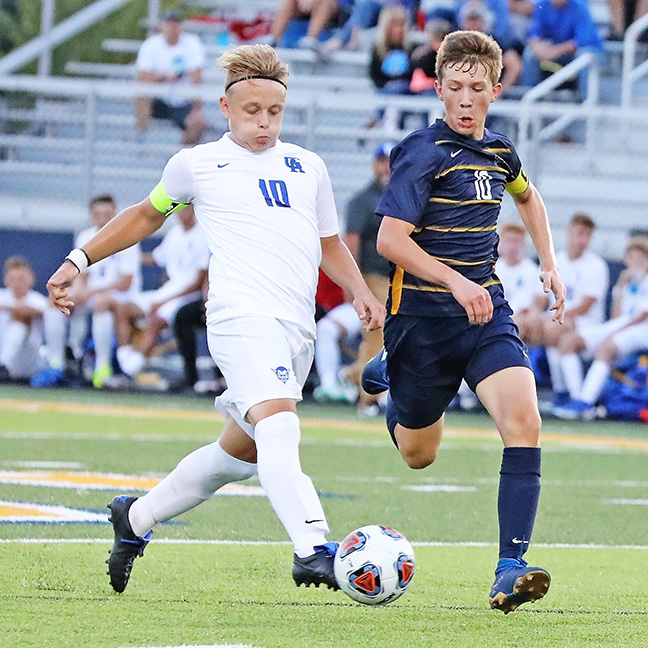 SOUTH POINT — The second half hasn’t been very nice to the South Point Pointers.
In the season opener, the Pointers played tough before losing in the second half.
On Tuesday in their Ohio Valley Conference opener, the game was scoreless but the Gallipolis Blue Devils scored three times in the second half for the 3-0 soccer win.
“The reoccurring trend continued tonight,” said Pointes’ coach Zach Jenkins. “We executed our game plan to a T in the first half and held an advantage in possession and in general momentum but never could find the net.
“The start of the second half was much of the same. We dictated tempo and held their rush in check. Gallia was given a penalty kick on a call prior to a corner kick and it just killed us.”
Brody Wilt scored on the penalty kick at the 5-minute mark to snap the scoreless tie.
Wilt then got an assist from Keegan Daniels seven minutes later and added an unassisted goal with 75 minutes on the clock to cap the scoring.
Brody Blackwell had 12 saves for the Pointers.
South Point plays at Fairland on Thursday.
Gallipolis 0 3 = 3
South Point 0 0 = 0
Second Half
Ga — Brody Wilt (penalty kick) 50:00
Ga — Brody Wilt (Keegan Daniels assist) 57:00
Ga — Brody Wilt (unassisted) 75:00
Saves—Gallia: Bryson Miller 7; SP: Brody Blackwell 12
Corner Kicks—Gallia 6, South Point 4