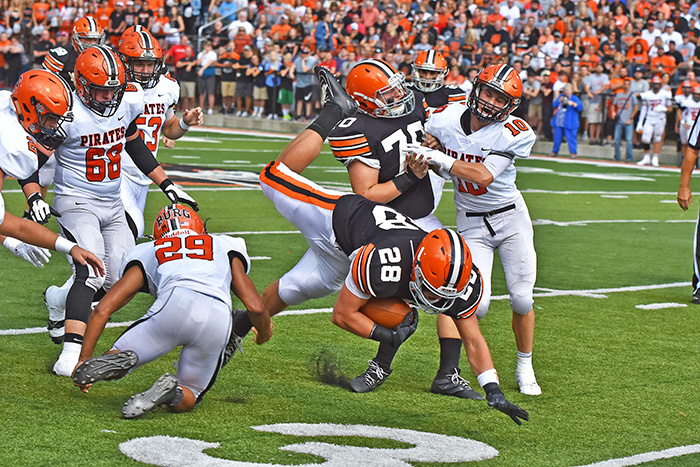 Ironton Fighting Tigers’ running back Reid Carrico (28) leaps into the air as he tries to stretch out this run for more yardage during Friday’s season opener. Carrico had 151 yards and three touchdowns in a 30-6 rout of the Wheelersburg Pirates. (Kent Sanborn/Southern Ohio Sports Photos)

This is our defense. This is our offense. And this is some more or our defense.
The Ironton Fighting Tigers showcased all aspects of this year’s team with a dominating 30-6 win over the rival Wheelersburg Pirates on Friday in front of a standing room only crowd at Tanks Memorial Stadium.
Ironton’s defense repelled the Pirates’ offense over and over and came away with a 3-0 win that snapped an 8-game losing streak to their rivals.
Ironton’s last win in the series was the season opener in 2012 at Wheelersburg when Mark Vass made his head coaching debut.
Ironton lost eight straight including two playoff games during the stretch.
“Number one, it’s a testament to the way our kids show up and prepare every week. Our thing is just playing hard, relentless. Four quarters of football. That’s something we were finally able to do, put together four good quarters of football and the results showed,” said Ironton head coach Trevon Pendleton.
“I can’t say enough about our kids. They’ve worked all summer for this.”
Ironton had 263 total yards and Wheelersburg 223, but Ironton started with a short field on several occasions thanks to its defense and a couple of kick returns by Reid Carrico and Kyle Howell.
Of the Pirates’ 165 yards rushing, 72 came on Makya Matthews’ touchdown scamper in the third quarter.
“My hat’s off to Wheelersburg. (The coaches) do a great job. They’re top-notch, a class act. They do a great job. They’re not going to go away lightly. They’re going to come back and have a great season also,” said Pendleton.
Ironton’s defense shut down the Pirates in the first half but had its own trouble against the Wheelersburg defense.
But the offense got on track in the second half and the defense continued to play well save one long run.
Ironton forced a Wheelersburg punt to start the game and Howell had a 16-yard return to the Pirates’ 44.
Carrico ripped off a 15-yard run to the 29 and Gage Salyers followed with an 11-yard carry to the 18.
But the drive bogged down and Avery Book’s first appearance in an Ironton uniform resulted in a 27-yard field goal to make it 3-0 with 5:15 on the first quarter clock.
The rest of the half had each team punt three times in the defensive struggle.
Ironton defensive end Junior Jones had the big defensive play as he intercepted a middle screen and returned it 13 yards to the Pirates’42.
The Fighting Tigers didn’t waste time adding to their lead after getting the second half kickoff.
Seth Fosson powered his way through several tacklers en route to a 35-yard run to the Pirates’ 21.
Carrico then carried three straight times including the final 8 yards for the score. Book’s conversion kick made it 10-0 with 9:49 on the clock.
Carrico racked up 151 yards rushing on 26 carries and scored three touchdowns.
“We was able to make a few adjustments, tweaks here and there that made us a lot better. It gave us something at the point of attack that we weren’t getting early on. That’s kind of our M.O. We’re going to wear on you and we’re going to make you tackle for four quarters,” said Pendleton.
The Pirates answered five plays later with the help of a 15-yard pass interference penalty against Ironton. Colin Freeman actually intercepted a pass and returned it for a score only to have the play waved off.
Matthews — who had 126 yards on 18 carries — scored on the next play.
Ironton was up to the challenge and went 69 yards in 10 plays capped by Carrico’s 4-yard run. A bad snap on the conversion left the score 16-6 with 1:55 on the clock.
“Reid’s a hard-working kid. You can’t say enough about him. But, honestly, our whole team shows up every day and they work. Reid is just one of those kids that everything he’s got he’s earned it. I’m just happy to see him get out there and perform,” said Pendleton.
“The lights are never too big for that kid.”
Ironton drove 78 yards in a time-consuming 12-play drive to begin the fourth quarter. Carrico followed nice blocks by Fosson and Jordan Grizzle to race 15 yards for a TD with 5:01 left. Book’s conversion made it 23-6.
Freeman came up with another interception and this one stood as he returned the ball to the 10-yard line. Salyers scored on the next play and it was 30-6 with 4:25 left.
“Our guys on the edge tonight was blocking great and we were starting to get a lot of movement.
Salyers had 54 yards on 12 attempts and Fosson had 43 yards on only four tries.
Wheelersburg 0 0 6 0 = 6
Ironton 3 0 13 14 = 30
First Quarter
Irn — Avery Book 27 field goal 5:15
Third Quarter
Irn — Reid Carrico 8 run (Avery Book kick) 9:49
Wh — Makya Matthews 72 run (kick blocked) 6:44
Irn — Reid Carrico 4 run (run failed) 1:55
Fourth Quarter
Irn — Reid Carrico 15 run (Avery Book kick) 5:01
Irn — Gage Salyers 10 run (Avery Book kick) 4:25
——
Wh Irn
First downs 14 18
Rushes-yards 33-165 46-254
Passing yards 59 9
Total yards 223 263
Cmp-Att-Int 5-14-2 3-6-0
Fumbles-lost 0-0 4-0
Penalties-yards 5-25 3-35
Punts-average 6-34.7 3-26.0
——
Individual Leaders
RUSHING —Wheelersburg: Makya Matthews 18-126, Evan Horsley 8-37, Hunter Ruby 4-0, Aaron Masters 1-6, Carson Williams 2-7; Ironton: Reid Carrico 26-151, Seth Fosson 4-43, Gage Salyers 12-54, Cameron Deere 1-7, Kyle Howell 1-minus 1, Kameron Browning 2-minus 1, Gunnar Crawford 1-1.
PASSING — Wheelersburg: Makya Matthews 1-5-1 20, Aaron Masters 4-9-1 39; Ironton: Gage Salyers 3-5-0 9, Caden Carpenter 0-1-0.
RECEIVING — Wheelersburg: Hunter Ruby 1-20, Makya Matthews 1-15, Case Dyer 1-3, Adam Vastine 1-14; Ironton: Gunnar Crawford 1-6, Kyle Howell 1-2, Jordan Grizzle 1-1.