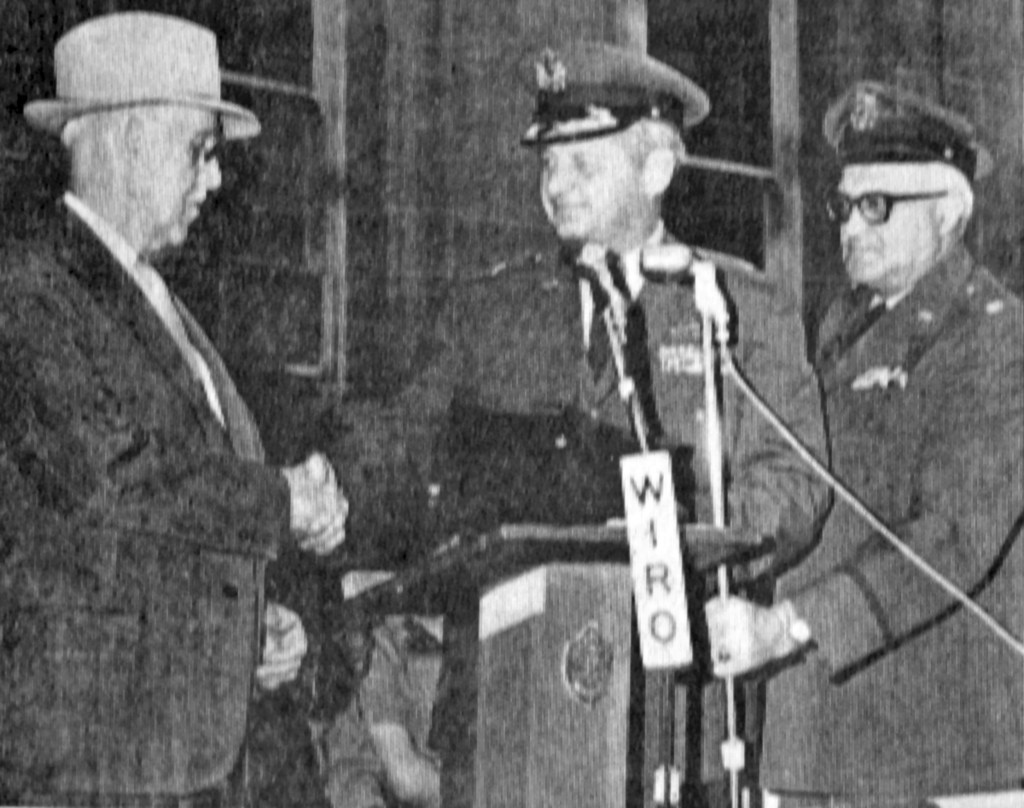 World War I flying ace and Ironton resident Col. William Lambert shakes the hand of Brig. Gen. Donald J. Campbell, the principal speaker at the Air Force Memorial program at an Ironton-Lawrence County Memorial Day Parade in the 1970s. Lambert, who died in 1982, is being honored with a new museum in Lawrence County. (The Tribune | File photo)

“Museums change people’s lives.” This is the message emphasized by the Ironton-based committee working to finalize the creation of The William C. Lambert Museum and Archive.

The Museum and Archive is ambitious about its role in Lawrence County and partners with the local community to have a positive social impact as it enriches the skills and creativity of the local public,” states a document prepared by the institution’s founding committee.

The organizing and governing committee for the newly formed museum states in its promotional material that, “A visit to the William C. Lambert Museum and Archive will be a rewarding experience where the collections are unique, the programs are engaging, and the exhibits are remarkable.”

“Our museum will offer safe and informal learning platforms that encourage visitors to imagine, explore, and experience Lawrence County’s military and cultural heritage.”

A WCLMMA-produced brochure adds, “A visit will add depth to an individual’s understanding of Lawrence County’s military history and opens new worlds of interest, while motivating visitors to contribute to their community in a positive way. The museum is designed to raise awareness about people, places, and subjects outside of the normal educational experience.”

Museum-produced promotional literature focuses on the educational and inspirational aspects of its mission: “The museum’s goal is to inspire learning and creativity while encouraging visitors to reflect on the past and realize the contemporary challenges currently facing our military and society.”

“These learning objectives aim to increase the visitor’s emotional involvement with the museum exhibits in hopes of achieving a genuine understanding of the military in American society.”

The museum and archive is designed to function as a repository for historical artifacts and records of a military nature relating to the life of World War I ace William C. Lambert and all military veterans of Lawrence County and our nation. The mission is to document, preserve, and explain the role and legacy of those veterans who shaped the national experience so that citizens will understand, “the price of freedom and be inspired by their example.”

The published main goal of the WCLMMA is to preserve artifacts and documents of the military history of the local area. Artifacts under consideration will specifically include, but not be limited to: the 91st Ohio Volunteer Infantry, raised at Camp Ironton in 1862; Colonel W.C. Lambert, the second highest scoring American Ace in WWI; Company I, serving with distinction in the 37th Division at the Meuse Argonne Offensive; and Company K “The Iron Men of Metz,” the Ohio National Guard Company formed at the Ironton Armory, serving in WWII and the first troops to enter Fortress Metz.

According to documents recently released by the committee working to establish the museum, a webpage and Facebook page will be operational at the end of August, and will include membership information and museum updates.

“The goal is to get recognition and financial support,” according to WCLMMA published documents. “We have 501(c)(3) status, so we are a non-profit organization.”

“We are currently looking for donations and a location for the museum, and are actively soliciting members of the community to become involved in the effort,” those documents add.

“Discussions are taking place with numerous entities to have a building in downtown Ironton donated for this purpose. We also want to ask local citizens who have Lambert memorabilia to consider donating to the museum.  They are encouraged to contact board members or Unger’s Shoe Store if they are interested in making a donation.  The public is encouraged to attend meetings if they are interested. Membership entitles participants to discounts at several local establishments in Ironton.”

Members will receive the WCLMMA newsletter, calendar of events, map of the museum, including nearby historic sites, invitations to special membership events, 10 percent discount on all items in the Museum Gift Shop and at Unger’s Shoe Store, and advance notice of the guest lecture series.

Members purchasing the Colonel Lambert Level will have their name engraved on the Museum Honor Roll bronze plaque.

From late March to mid-August 1918, Lambert served as a fighter pilot for the Royal Air Force in what would come to be known as the “Great War”: World War I. When he was hospitalized as a result of shell shock and burst eardrums, Lambert’s 22 kills of enemy aircraft were the highest number of any American pilot in the war. By the Armistice, Lambert’s total would be surpassed only by Eddie Rickenbacker, a former race car driver from Columbus.