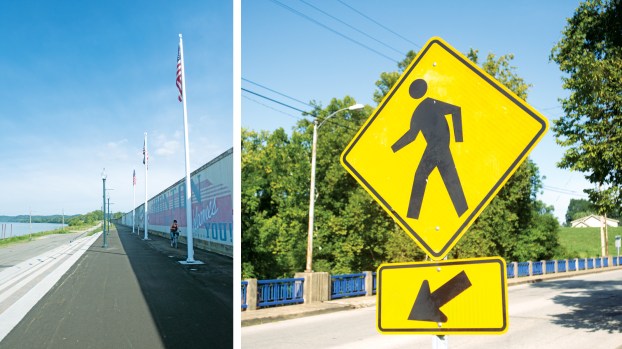 A sign marking the beginning of a newly installed walking and bike path at Storms Creek in Ironton. It runs from Storms Creek to the Center Street Landing. (The Tribune | Mark Shaffer)

A walking/running/bike path in Ironton that follows the Ohio River from the Center Street Landing to the Storms Creek park is complete.

The path is part of a project to improve the riverfront and give people more access to exercise and enjoy the beauty of the Ohio River area.

Ironton Mayor Katrina Keith said the goal is to bring people in. People will be able to ride their bikes on the trail, rather than on the streets or to walk and not worry about traffic.

The path is paved with asphalt and metal posts were put up at various locations to keep motorized vehicles off the path.

The $1.5 million project is paid for by a grant from Clean Ohio and the Ohio Department of Natural Resources.

Another part of the project was new concrete seating cut into the hill at the Center Street Landing. It was finished in time for Memorial Day and was used for the Navy Night ceremony and for the Ohio River Revival musical festival in June.

As part of the project, three flagpoles with American flags were put up in front of the Welcome to Ironton mural. Blue LED ground lighting will be installed to mark the pathway at night. The city also hopes to even out the pavement in front of the steps to even it out.

The city has been working on improving the riverfront for the better part of a decade to make it more useful for residents and to make it better for events.

In 2013, mooring tie-ups for transient boaters were installed on the river with $630,000 in grant money from the U.S. Fish and Wildlife Service.

Once this weekend’s Labor Day holiday is out of the way, the traditional campaign season for the general election kicks... read more