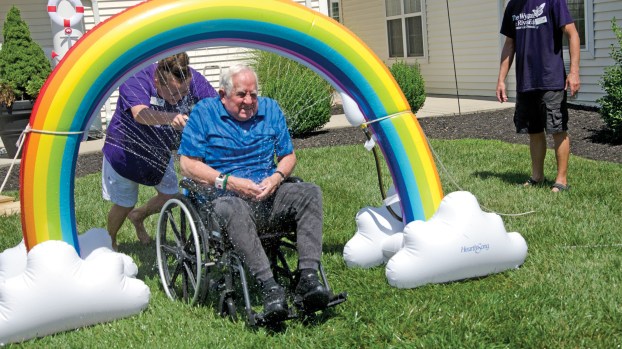 ROME TOWNSHIP — The Wyngate at RiversEdge continued its fifth anniversary celebration on Thursday by hosting an end-of-summer party for its residents and staff.

The back patio was decorated with a tiki theme and water slides and a sandbox were set up.

“We just wanted to one last event for the season for our residents,” activities director Julie Poff said. “We decided to do a beach theme and got the floats.”

She said it was a way to continue the festivities from last week’s marking of the fifth anniversary of the senior living community, as Labor Day weekend approached.

In addition, Poff served pina coladas to the attendees.

Staff took turns going down the water slide, and they were joined by residents such as Mary Kessick, 90, who was strapped into the rafts to take the ride.

“It’s just one last summer event, “ Poff said. “We all got to wear shorts today and it’s just a chance to play in the water.”

Border to border: Ham radio operators set up outside courthouse