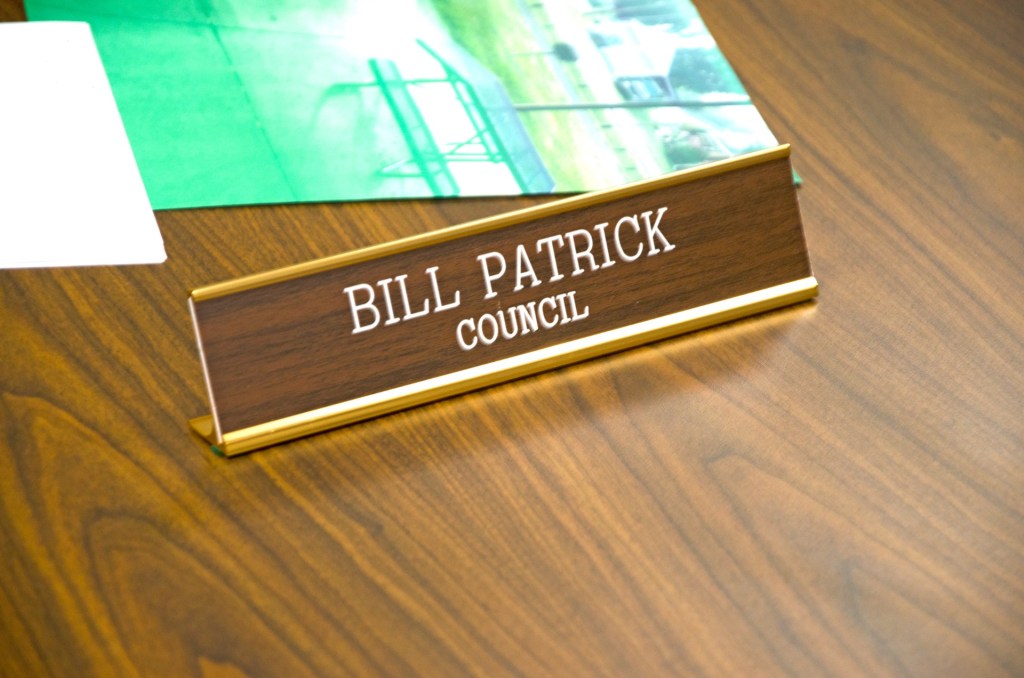 The nameplate of Bill Patrick remained on display at Tuesday’s meeting of the South Point Council. Patrick, who was elected to his first term on the council in November 2017, died Aug. 13 at age 69. (The Tribune | Heath Harrison)

A moment of silence was held following the opening pledge and prayer.

“He was a well-thought-of member of our team here in South Point,” Mayor Jeff Gaskin said.

“We’ve lost a dear member of our council and community,” Boggs said. “We pray that the work Bill has done will go on.”

One of Patrick’s main issues during his time on council was working to get a wrought iron fence installed around White Cottage Cemetery, which the village had recently expanded.

Council member Chris Smith has said since Patrick’s passing the village would work to continue the effort, for which Patrick had a few thousand dollars in private donations pledged. Smith has said the fence could be in memory of Patrick.

Resident Brenda McKee asked the council about the fence, to which Gaskin said they would take up the effort.

“We will continue to act on that,” he said, stating they would be discussing plans.

During the public comment portion of the meeting, the council was asked about the process for filling Patrick’s seat.

Gaskin said the rules call for the council to select a replacement within 30 days.

However, as Smith was absent from Tuesday’s meeting the four members present were not enough to select a replacement.

It will then fall to the mayor. Gaskin said he would be discussing the matter with council members, with the exception of Michael Lynd and Chuck Austen, as they are on the ballot in November’s general election.

“I will not do this on my own,” Gaskin said. “I will consult with the council.”

The council also had a first reading on an ordinance regarding disturbing the peace, which has been in the works for several months.

As there were only four members present, the council was not able to vote to suspend the three-reading rule for the matter and, instead, voted for a first reading.

The motion was put forward by Mary Cogan and seconded by Bill Lynd and approved 4-0.

A second reading will be scheduled for the October meeting of council, at which point the three-reading rule could be suspended.

Police Chief Chris Mahjer was asked if he felt the ordinance was enforceable, as revisions had been made, to which he said he believed this was the case.

• Adopted a resolution to approve establishment of a records commission and appoint members to it.

Gaskin said the village has “a box car full of old records” and that the commission is needed to determine what to preserve and what to destroy.

He said the historical societies must be contacted before any old records deemed not worth preserving, such as “old sewer records from the 1980s” could be destroyed.

Gaskin appointed Paul Dennin, who was present at the meeting, to the commission.

• Approved a resolution authorizing Gaskin to reapply for grants for sewage projects.

• Approved the transfer of funds for September 2019.

• Heard from Mahjer, who said the police department’s new K-9 is in training. He also said he would like council to discuss updating their fee system at a future meeting.

• Heard from village administrator Russ McDonald, who said the sewage plant received a visit from the Ohio EPA, who made suggestions on how to deal with complaints of an odor at the plant. As a result of the changes implemented, McDonald said he had been told by residents the problem had declined significantly.

• Heard from Gaskin, who said he had discussed complaints from residents about “juice” and residue from a garbage truck causing odors. He said he discussed the problem with Republic Services, who handles village collection and that it was likely an issue with a seal on the truck, which the company pledged to fix.

• Heard from Gaskin, who reminded that the village yard sale will take place Saturday, Oct. 5.