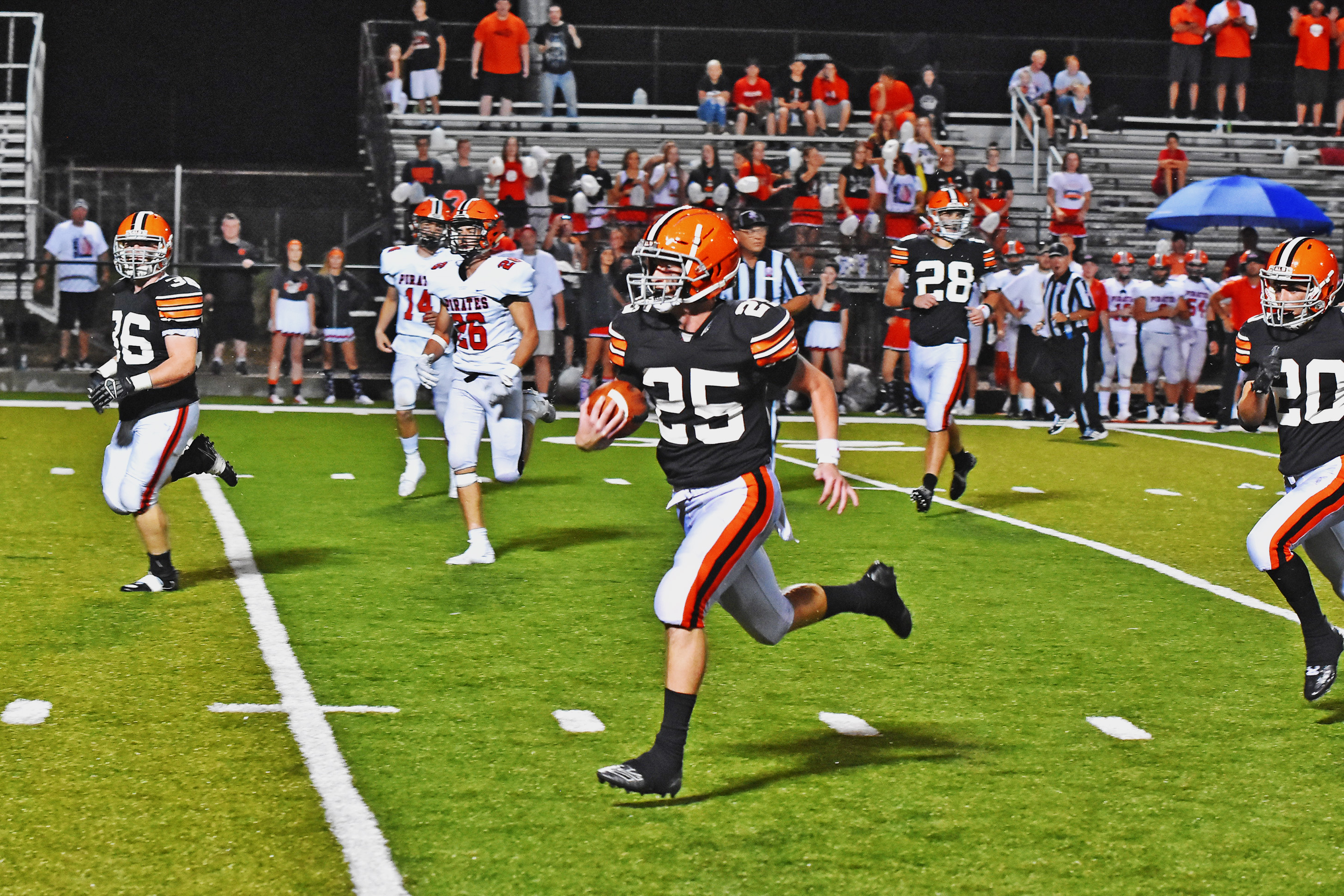 Last week was big for the Ironton Fighting Tigers, but each week keeps getting bigger.
After rolling Wheelersburg 30-6 last season to end an 8-game losing skid to the Pirates, the Fighting Tigers must now avoid any letdown as they host the Russell Red Devils on Friday.
Ironton (1-0) was in a similar situation last season and had to battle its way to a 16-7 win at Russell.
Reid Carrico was a key reason for Ironton’s win last season. Carrico blocked a punt and ran it back for the first touchdown and erased a 7-2 Russell lead.
Carrico then broke loose on a 74-yard touchdown run with 1:58 to play in the game after Ethan Duncan recovered a Russell fumble at the 20-yard line to stop a potential go-ahead touchdown and give Ironton coach Trevon Pendleton his first career win.
While Ironton has a lot of returning starters and some key additions, Russell is also a veteran team that has some momentum after opening the season with a pair of lopsided wins.
Russell is coming off a 41-0 romp of nemesis Raceland who lost starting quarterback Jack Heighton to a broken collarbone during the game.
However, the Red Devils dominated the Raceland game from the start after a similar performance in beating Mason County 49-13 the previous week.
Russell junior quarterback Charlie Jachimczuk (5-10, 158) was 7-of-13 passing for 92 yards and two interceptions while running 10 times for 93 yards against Mason County.
Running back Nathan Conley led Russell with 96 yards on 15 carries while Malakai Anderson had 78 yards on 11 attempts. The Red Devils rushed 56 times for 365 yards.
The top receivers were senior Josh Griffith (5-10, 176) with three catches for 36 yards, freshman Mason Lykins (5-9, 141) one catch for 71 yards and a TD, and junior A.J. Raybourn (6-2, 176) with two grabs for 23 yards.
In the win over Raceland, the Red Devils offense racked up 263 yards rushing on 53 attempts and Jackimczuk — who shared QB duties last season — was 2-of-2 passing for 75 yards and ran eight rushes for 16.
Conley was the main weapon as he carried 19 times for 139 yards and two touchdowns. Anderson had 62 yards on 16 tries and scored three times.
Griffith had one catch for 33 yards and a touchdown while Jenkins added one reception for 42 yards.
Up front, the tight ends are Raybourn and Ethan Sanders. Senior three-year starter Will Gunning (6-2, 275) is at center, with junior A.J. Biggs (6-0, 285), senior Felix Reyes (6-4, 300) and senior Blake Stump (6-2, 268) in the starting lineup.
Junior Anthony Blevins (6-0, 229), junior Landon Taylor (6-1, 190), junior Ian Bell (6-3, 279) and sophomore Jaden Smith (5-11, 180) will provide depth.
The defense also has some experience and depth.
The defensive strength of the team is linebackers Isaac Jenkins (6-3, 197), Sanders (6-2, 218), Conley (5-10, 215) and Anderson (6-1, 218). All are seniors except Conley who is a junior.
Rotating on the defensive line are returning starter Blevins, Reyes, senior Frank Jeffrey (5-10, 201), Biggs and Bell.
The secondary has Jachimczuk and junior Ethan Sharp (5-7, 166) at the corners with Griffith and senor Brayden Pack (6-2, 185) also in the secondary mix.
Ironton leads the series 28-5-1.

Jim Walker jim.walker@irontontribune.com PEDRO — Sam Simpson is not magician, but he still knows how to work some tricks with... read more