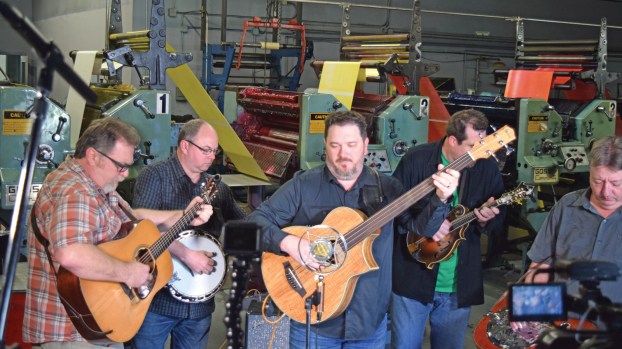 The band, consisting of Ironton native Dave Bond on guitar and lead vocals, Josh Click on bass, Bob Kelley on dobro, Brandon Shuping on mandolin and Todd Sams on banjo, is based in Lancaster.

They recently hosted a release party at the Ro-Na Theater for their first CD and played the inaugural Ohio River Revival festival in June.

Rob Pemberton, who holds the title of exalted ruler of the Ironton Elks Lodge, said they had wanted to lease out the ballroom and partnered with the owner of Fusion nightclub to redo the room.

“A lot of work’s been done,” Pemberton said.

In addition, the second floor patio area has been redone, now featuring locally-crafted tables and chairs in place of the previous folding chairs.

Pemberton said, in addition to leasing the ballroom for events, the Elks will use it often for themselves.

“We hold a lot of meetings and things here,” he said.

String Therapy were also part of The Ironton Tribune and Armstrong Cable’s Press Room Recordings series. To view video from that episode, visit our Facebook page.

PureCycle signs agreements: Will expand by building plant in Europe

The Lawrence County-based PureCycle Technologies is partnering with a packaging specialist, Aptar Group, to make packaging for food products in... read more