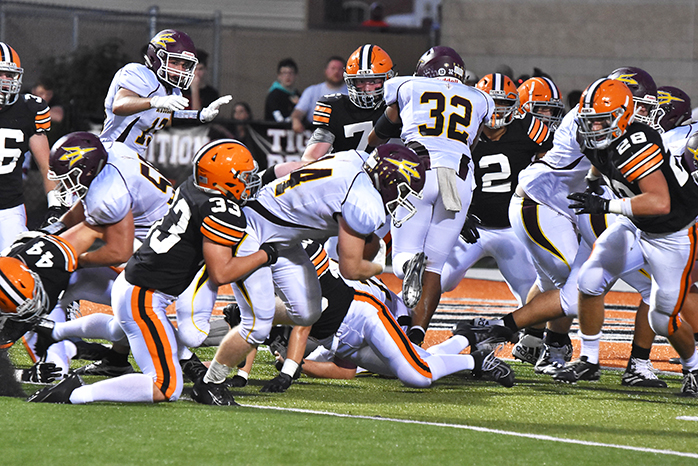 Call Ben Matlock and Perry Mason. This was a case for the defense they could learn from.
The Ironton Fighting Tigers used a stellar defensive effort to shut out the Russell Red Devils 10-0 on Friday night at Tanks Memorial Stadium.
Russell had 233 total yards with 193 coming on the ground. However, 67 yards came on one run and Ironton had a big goal line standing in the first half.
“You couldn’t ask more defensively. Our defense is just playing lights out. They’re doing everything we need. They’re staying after them, they’re pressuring people. You know, a little more bend and not break than we wanted to be tonight,” said Ironton coach Trevon Pendleton.
Russell (2-1) had scored 88 points in its first two games and the first team had not allowed a point. The Red Devils defense was equal to the task with the exception of two big pass plays.
“In the first half, (Russell) limited our possessions. We only got two, possibly three possessions We’ve got to do a better job of getting off the field on third down and winning on first downs,” said Pendleton.
With the Russell defense keyed on stopping running back Reid Carrico, Ironton quarterback Gage Salyers stepped up and ran 12 times for 58 yards and was 9-of-16 passing for 157 yards and a touchdown.
“Gage has a lot of arm talent. His biggest thing is getting in rhythm and staying confident. That’s something we’ve got to do with him. He’s got to understand he can make every throw on the field, but if doesn’t have the correct footwork he can miss every throw on the field,” said Pendleton.
“Gage is a super talented kid. He can make every play on the field.”
Russell had its only real threat in the second quarter thanks to a 67-yard run by Nathan Conley to the Ironton 24.
The Red Devils moved to a first and goal at the 6-yard line but three plays netted 4 yards and on fourth down Dalton Crabtree came clean and brought down Conley for a 3-yard loss.
Ironton then moved the ball to the Russell 49 only to have a sack and a penalty push the ball back to the Fighting Tigers’ 44.
That’s when Ironton got its first big offensive play as Salyers scrambled to his left, stepped up and heaved a long pass down to the 10-yard line where Colin Freeman reached out and made the catch falling forward for 51 yards to the 5-yard line.
Ironton’s drive bogged down but Avery Book booted a 26-yard field goal with 3:18 left in the half and it was 3-0.
The Fighting Tigers used a 33-yard run by Salyers to get in position to score at the start of the second half. The drive stalled and Ironton lined up for a 39-yard field goal attempt only to run a fake field goal that didn’t fool Frank Jeffrey who brought down Book for a 4-yard loss.
Russell used 10 plays to get to the Ironton 28 only to have the defense hold as Cameron Deere tackled Malakai Anderson for a 4-yard loss on a fourth down pass to halt the threat.
Ironton punted but Junior Jones picked off a pass and returned it 10 yards to the Russell 35 and Ironton was back in business.
However, Russell’s defense was up to the challenge and Ironton was stopped on downs at the 32.
The Red Devils were forced to punt and Ironton mounted a clutch offensive drive highlighted by the clutch offensive play of the game.
After Salyers ran for a big first down on a fourth down play, he went to the air on the next play and found Carrico behind the defense and hit him in stride at about the 5-yard line.
A Russell defensive back knocked the ball from his hands but not until Carrico had crossed the goal line with 2:58 to play. Book’s conversion made it 10-0.
‘We’ve just got to execute. We’ve got to find a way to get it going offensively. We’ve got way too many athletes not to. That’s on us. We’ve got to find a way to get it done. We’re going to go back to the drawing board,” said Pendleton.
Ironton hosts Fairland next Friday in an Ohio Valley Conference game.
Russell 0 0 0 0 = 0
Ironton 0 3 0 7 = 10
Second Quarter
Irn — Avery Book 26 field goal 3:18
Fourth Quarter
Irn— Reid Carrico 45 pass from Gage Salyers (Avery Book kick) 2:58
——
Rsl Irn
First downs 11 12
Rushes-yards 37-193 37-144
Passing yards 40 157
Total yards 233 301
Cmp-Att-Int 6-11-2 9-16-0
Fumbles-lost 0-0 1-1
Penalties-yards 6-30 11-60
Punts-average 5-34.8 3-49.7
——
Individual Leaders
RUSHING — Russell: Nathan Conley 19-145, Malakai Anderson 7-21, Charlie Jachimczuk 7-11, Ethan Sharp 4-16; Ironton: Gage Salyers 12-58, Reid Carrico 16-39, Seth Fosson 4-29, Cameron Deere 3-22, Kyle Howell 1-0, Avery Book 1-minus 4.
PASSING — Russell: Charlie Jackimczuk 6-11-2 40; Ironton: Gage Salyers 9-16-0 157.
RECEIVING — Russell: Jaosh Griffith 2-16, Malakai Anderson 2-0, Brandon Benge 1-6, A.J. Raybourn 1-18; Ironton: Reid Carrico 4-56, Jordan Grizzle 2-35, Colin Freeman 1-51, Kyle Howell 2-15.

Symmes Valley Vikings’ running back Josh Ferguson (1) picks up some of his 241 yards rushing in a 37-0 win... read more