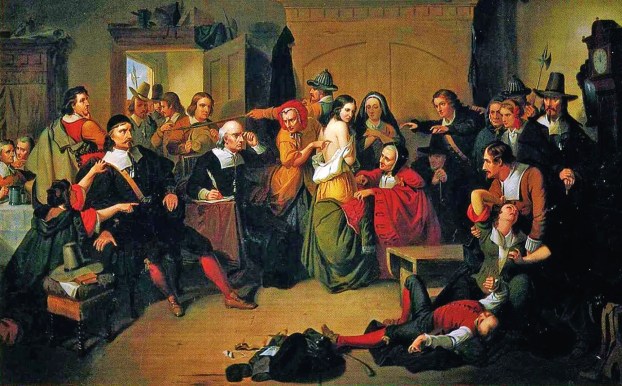 “The Examination of a Witch,” by T.H. Matteson. The most famous witch hunt in American history took place in Salem, Massachusetts in the early 1690s. More than 200 were accused and 19 were found guilty and executed. (Public domain)

History lesson: ‘Thou shalt not suffer A witch to live’

The word “witch” comes from Anglo-Saxon origins. It means magician.

In very early times, a witch might be male or female, but with the passage of time, mostly women were thought to be witches. Men possessing the powers of a witch were termed sorcerers, warlocks or wizards.

Witchcraft may be traced to pre-Christian times in many different locations in Europe. From the 15th through the 18th centuries, church leaders tried to destroy witchcraft. From 1484 to 1782, an estimated half million suspected witches were hanged, drowned or beheaded. Such executions continued until 1793, when two accused witches were burned in Poland.

Various tests were used when judging whether or not a person was a witch. Moles, scars and birthmarks were thought to be the result of the Devil touching the accused. American colonists brought their belief in witches from England. Persecution occurred in Connecticut, Massachusetts and Virginia.

The most famous witch hunt in American history took place in Salem, Massachusetts in 1692. Salem Village (now Danvers, Massachusetts) was located in the northeastern corner of Massachusetts, 16 miles from Boston. It was founded in 1626 by Roger Conant. It was known for fishing, shipping and shipbuilding. Although the birthplace of Israel Putnam and Nathaniel Hawthorne, Salem Village would become more famous as the center of the “witch craze” in 1692.

In January 1692 Samuel Parris was the minister in Salem Village. Both Betty Parris, a 9-year-old, and her cousin, 11-year-old Abigail Williams, lived in the Samuel Parris home. The two girls became sick at the same time — staring into space, falling on their hands and knees, making choking sounds and lying on the floor kicking and screaming loudly.

Samuel Parris sent for the village doctor, who examined the two girls and administered medicines. He told the Rev. Parris the girls were not physically sick, but the “evil hand” had touched both.

When the word leaked out about the girls, other young girls began to have their own fits. By September 1692, there were 12 girls who were bewitched. The girls began accusing certain adults of bewitching them.

Cotton Mather, the village doctor, and Reverend Parris all were educated men and singularly admitted that they believed in witchcraft. At first none of the girls would name anyone who had tormented them.

On Feb. 25, 1692, some of the girls called out three names of women who had bewitched them. The plain farmers of Salem Village were ready to believe the girls’ testimonies. The afflicted girls could not have selected anyone else at the time with such noticeable faults.

Tituba, part black and part Indian, was from the West Indies and a slave in the Parris household. She told the girls strange voodoo stories and showed them magic tricks. Sarah Good was married to a man who could not hold a steady job. She smoked a pipe, talked to herself and begged door to door. Sarah Osburne upset those in Salem Village by living with a man after her husband died. She had stopped going to church.

All three were placed in jail in Boston, but Tituba decided to confess and name others who were witches. During late March and the first few days of April, several local women were arrested and the witch hunts spread to Salem Town.

On June 2, 1692, the Court of Oyer and Terminer (“to hear” and “to determine”) tried a woman named Bridget Bishop. She was the wife of a tavern keeper and had a bad reputation. Several confessing witches said she was one of their leaders.

The jury found her guilty of being a witch and the judges sentenced her to die. However, there was no law in Massachusetts Bay providing the death penalty for witches, so the colonial legislature passed such a needed law.

On June 10, 1692, the sheriff took Bridget to Gallows Hill, where she was hanged. She was the first to be executed in the witch hunt craze. After Bridget Bishop, many more witch suspects were held. Sometimes, as many as 50 new witches were accused in one day’s time, not just in Salem Village, but all over eastern Massachusetts.

At a September meeting of the Court of Oyer and Terminer, a suspected male witch, Giles Cory, refused to plead either innocent or guilty. Using an old English law, Cory was taken to a field beside the prison in Salem Town and tortured.

Very heavy stones were placed upon his chest and still he would not utter “innocent” or “guilty.” Legend says he asked for more weight! He was crushed to death. By not pleading either guilty or not guilty, the 80-year-old Giles Cory was able to save his estate for his family.

Near the end of September 1692, the witchcraft panic ended. Those afflicted girls had gone too far. The girls accused Cotton Mather of being a wizard, and later, the governor of Massachusetts’ wife, Lady Mary Phips. The Salem witch trials were at an end. Samuel Parris’ congregation dismissed him and he left Salem Village in disgrace. His daughter Betty disappeared in history.

The Salem Village witchcraft statistics are telling: 24 people died as a result of the witchcraft trials, 19 were hanged, four died in prison, and one, Giles Cory, was pressed to death. Two dogs were also executed as witches.

Those who were acquitted were not released from prison until they paid their “jail fees” for food and their personal chains. If such a person was in prison, he or she could not work to pay the jail fees.

When the witchcrafts accusations ended, 150 of the accused were still in prison. Those who would confess to witchcraft were not sent to Gallows Hill, but received a reprieve from the judges.

On Jan. 14, 1697, Judge Samuel Sewall publicly repented his role in the witchcraft trials and asked God to pardon him for his sins of judgment. The members of the jury also repented. Twenty years after the Salem Village executions, the legislature of Massachusetts reversed the convictions and granted reparations to the heirs of the victims.

The legislature voted a fund of $30,000 to be distributed among the relatives of the dead and surviving witches. After the division of legislative funds, the life of Giles Cory was estimated to have been worth $50.

On Aug. 25, 1706, a young woman named Anne Putnam asked to be admitted to membership in the local church. To be admitted, a public confession was required and then church members would vote on her request. When Anne was 12, she had been one of the most active of the afflicted, screaming girls. She probably accused more witches than anyone!

In the meeting house were many relatives of the innocent men and women whom Anne had helped imprison and hang. Anne received a unanimous vote to be a member of the church.

What was the main cause of this witch hysteria in northeastern Massachusetts? Many theories have been brought forth: adolescent hysteria, personal guilt from evil thoughts or actions, a need for attention, the conflict between the mercantile Salem Town and the agricultural Salem Village and the presence of a fungus (ergot) in their bread.

In addition to such theories, Salem Village went through a period of tension resulting from a change in government, Indian conflict, smallpox epidemics and two damaging fires.

In the Bible in the book of Exodus (22:18) is the admonition “Thou shalt not suffer a witch to live!” The residents of Salem Village used this verse quite literally in 1692.

Gliding high into the earth’s stratosphere

How would you like to ride a glider to 90,000 feet? This glider project was started by Steve Fossett and... read more