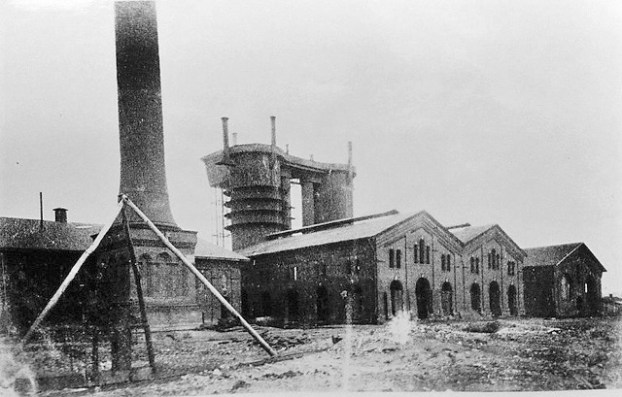 In 1872, construction began in Ironton on what would eventually become the biggest blast furnace in the world.

Before the town could celebrate, the Panic of 1873, a nationwide financial crisis that triggered an economic depression, threatened to shut down the project entirely.

Officers of the Etna Iron Works Company adjusted their plans by finishing only one of the two stacks of the Big Etna Furnace. The “Alice” stack, named for the daughter of Etna Iron Works president George Willard, stood 86 feet tall when finished.

The “Blanche” stack, named for Blanche McGovney, who later married Charles S. Gray, was left unlined and incomplete, a “mere iron tube of ponderous size,” as described in the newspaper at the time.

On the evening of Sept. 13, 1875, the Alice stack was blown in, to the delight of the large crowd in attendance. The hot blast coke furnace, made about eight tons the first night, and twice as much the following day. Over the next three years it produced nearly 30,000 tons of iron. In 1887, a fire in the stock house, which contained ore, coal and coke, caused $1,700 in damages.

The stock house was rebuilt and, the following year, the Blanche stack was brought to completion. Finishing the twin stack took 400,000 bricks and cost about $23,000, with engines and ovens from Alice switched over to Blanche.

By 1889 however, Etna Iron Works was in receivership and sale of the furnace was ordered. With nearly everything from the furnace stripped away, Henry Marting purchased the operation at an auction for $90,000.

In 1912, he formed the Marting Iron & Steel Company with the goal of refining iron into steel, a feat that was never accomplished. The Marting Company made plenty of iron, employed 300 men and was a tremendous success, but it never did produce steel.

The Big Etna property was sold shortly after the flood of 1937, and later became part of the Allied Chemical Company.

The area has been part of an EPA Superfund site since the mid 1990’s to remediate “contaminated soil, sediment and groundwater with hazardous chemicals,” according to the EPA web site. The property has now been declared ready for use with a list of zoning and occupational restrictions.

Henry Marting died in 1919. You can visit his final resting place at the Lawrence County Museum & Historical Society’s annual Woodland Cemetery Historic Walk, to be at 5 p.m. Saturday, Sept. 28.

Bible is the app you really need

For me, car time equals radio time and, since I am a confessed talk radio aficionado, I am often introduced... read more