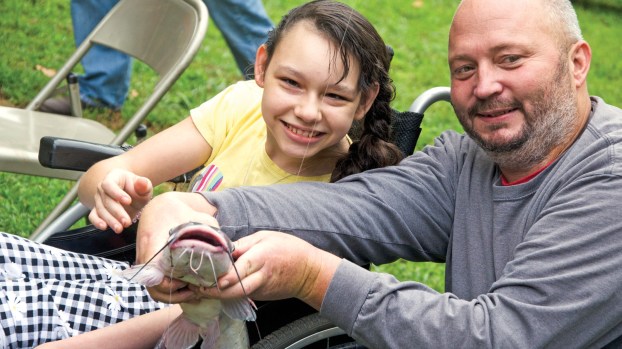 FAYETTE TOWNSHIP — “This is the happiest day of my life!” Konnor Patrick exclaimed.

The boy had just caught another fish, coming only an hour after the first catch of his life.

He was one of many taking part in the Special Needs Youth Sportsmen fishing day on Saturday, an event which drew nearly 100 people to a lake off County Road 59 in Fayette Township.

A caravan of vehicles met at Tractor Supply in South Point early in the morning, taking the participants to the site, where children, teens and young adults with special needs were treated to a free day of fishing.

“We’re a 501c3 organization,” Mike Finley, vice president of SNYS, said, sating the group works from public and private donations, as well as a grant from the Ohio Department of Natural Resources. “We do this twice a year, in the spring and the fall.”

Finley said the fishing pond, on private land, is stocked before each fishing event and that the youth usually fare well in their fishing.

He said the fishing day has been going on for nine years, eighth of which are under the SNYS banner. The group, founded by George McCalvin, was launched after the first year of the event.

In addition to the fishing, for which the equipment was provided, the group treated the youth to both breakfast and lunch, with the second meal including having their catch cooked on site.

Finley, who serves under the group’s president Kim Damron, said the event always brings a turnout and that Saturday’s crowd was typical.

In addition to the families and group members, the crowd included two candidates running in next year’s election for the 93rd district Legislature seat being vacated by Rep. Ryan Smith.

Jeff Halley and Bobbi Montgomery were both on hand to take part and assist in the event.

Montgomery said it was great to see “the look on the not just the children’s faces, but the parents, when a fish was caught.”

She said she thought it was especially great that the volunteers included several individuals who have gone through recovery programs for addiction.

“This is about building a community,” she said.

In addition to the fishing day’s SNYS also hosts a pheasant hunt and a deer hunt.

“And we do a banquet following the deer hunt,” Finley said.

For more information on the group and its events, visit www.specialneedswyouth.org.

Shoppers in Ironton now have another option for clothing and other items. The Consignment Barn hosted its grand opening on... read more