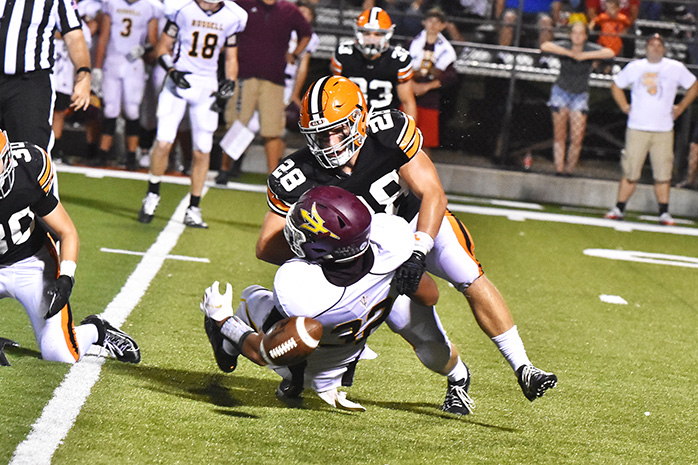 Maybe most people hate Mondays, but you’ll never convince Reid Carrico and the Ohio State Buckeyes’ football coaching staff it isn’t a great day.
Talking with Ohio State assistant coach Al Washington on Sunday night convince the Ironton Fighting Tigers’ junior linebacker that he was ready to make his decision on where he plans to play college football.
Ohio Stadium.
After watching the Buckeyes whip Cincinnati 42-0 on Saturday and talking with Washington who is the linebacker coach, Carrico said a difficult decision became rather easy.
“It just felt like I was home there. It feels like I’m supposed to be there. The coaches were really fired up when I told them. I’m glad they feel as good about it as I do,” said Carrico.
The 6-foot-3, 225-pound Carrico is only a 16-year-old junior but has a who’s who list of offers from what seems every Division I program in the country.
Among his 34 offers besides Ohio State were Notre Dame, Clemson, Alabama, Texas, Michigan, Florida, Wisconsin, Ohio, Kentucky, Marshall, Michigan State, Tennessee, LSU, Oklahoma, Indiana, Louisville, Arkansas, Florida, Duke, Boson College, Florida State, Cincinnati, Minnesota, Northwester, Mississippi, Penn State, Pittsburgh, Purdue, Toledo, Vanderbilt, Virginia Tech and Iowa State.
Carrico is listed by 247Sports as the top-ranked inside linebacker in the Class of 2021 and he was the Buckeyes No. 1 linebacker target in Ohio.
“It feels awesome. No more pressure. I just get to go play football now,” said Carrico. “The best in Ohio are supposed to go to Ohio State. That’s the next level. That’s everyone’s dream growing up, playing for the Buckeyes.”
Besides playing linebacker, Carrico is the Ironton tailback who earned All-Ohio honors last season on the offensive side of the ball.
Carrico ran for 1,256 yards and 14 touchdowns last season. He averaged 6.6 yards a carry and also caught nine passes for 120 yards and a score in earning first team all-district honors and special mention All-Ohio.
This season, Ironton is 2-0 and Carrico has 190 yards on 42 carries and he has scored four touchdowns.
“(Carrico) is a very mature kid. He’s very humble. It hasn’t changed his demeanor or anyone’ on the team’s demeanor at all,” said Ironton coach Trevon Pendleton.
A talented all-around athlete, Carrico is also a two-year starter on the basketball team at center and has played baseball and ran track.
His great uncle Earl Webb was an outfielder who played seven years of Major League baseball and still holds the American League record with 67 doubles in a single season (1931).

Jim Walker jim.walker@irontontribune.com PINE GROVE — Having the medalist isn’t a guarantee to win, but it sure helps. Both the... read more