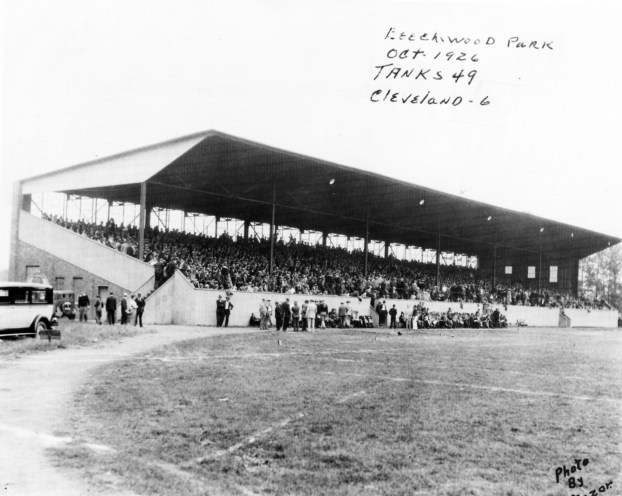 Tanks Memorial Stadium is at capacity as the crowd watches the Tanks roll over the Cleveland Indians 47-0 in October of 1926, the year the stadium was built and first opened to the public.

One thing about the football fans of Ironton in the 1920s, they didn’t just talk the talk. They walked the walk.

Case in point was the construction of Beechwood Stadium, which was built in 1926 at a cost of $33,500 with a seating capacity of 3,112 seats and 40 box seats that accommodated four to six people.

There were large restrooms under the stadium with a large concession stand operated by Charles Hite. Locker rooms complete with hot and cold water showers were built at either end of the stadium. There were two main entrances and eight exits as well as four ticket offices all under the stadium.

Actual talk about a stadium began after the 1925 season but no action was taken until December when a meeting was held at the Ironton Elks Lodge and attended by more than 50 boosters.

But an official offer made by private parties to build the stadium caused all other plans to be dropped at the time. Following a four-month delay, the Ironton News started a publicity campaign by publishing coupons.

The campaign began on March 23 and in the first week a total of $1,950 was voluntarily pledged for the sale of season tickets.

The next move was to get the approval of the Ironton Board of Education to use Beechwood Park and the approval was given at the April 8 meeting when the Ironton News presented the proposition in writing.

The stadium group then called a public meeting at the Court House Auditorium on April 16 by Bert Cohen, Post Commander of the American Legion. At that time, the Legion had become active in the move making the Frank J. Goldcamp Post the only organization in the city that subscribed stock in the stadium.

The seven or eight boosters who attended the meeting at the courthouse laid plans for the organization of a stock company which finally resulted in the build of the stadium complete with a covered roof.

At the same time, incorporation papers were applied for and the incorporators were H.M. Edwards, Bert Cohen, James Collier, Harry Von Kennel and Charles L. Collett, all members of the American Legion. A committee comprised of Brook Capper, George P. Mahl and O.H. Scherickart were also named to get plans, bids and to look about the location.

On April 26, the committee started the drive for $30,000 worth of stock guaranteed to pay seven percent each year with a certain principal being refunded from the profits. The pledges reached the $15,000 or half the goal on the first day.

On May 6, the $30,000 had be over-subscribed and on May 7 at the Chamber of Commerce rooms, the Beechwood Stadium Co., a non-profit corporation, was organized by the election of the following directors: A.R. Johnson, L.R. Andrews, D.C. Davies, Frank Wieteki, Brook Capper, Dr. Cos Burton, O.D. Hayes, W.P. Lewis, George P. Mahl, Charles L. Collett, E.J. Merrill, Leo Brumberg, Dr. T.H. Remy and C.W. Golden.

On May 13, A.R. Johnson and L.R. Andrews appeared before the Board of Education and secured a 20-year lease on the stadium site in Beechwood Park with the understanding that the Stadium Association would have full charge of the affairs until the same was paid for and all stockholders had received their money back plus seven percent interest.

On May 21, the directors awarded the contract for the steel to the Wisconsin Bridge Company. Other contracts were let to O.H. Schweickart and thus the fine building was completed.

The stadium opened on Sunday, Sept. 19, when the Tanks played the Columbus All-Stars in the first game of the season. The Tanks rolled over Columbus 27-0.

It was during the 1926 season that the stadium was renamed Tanks Memorial Stadium in honor of the World War I veterans who had come home to play for the Tanks.

On Thanksgiving Day, the Tanks hosted the Kansas City Cowboys and posted a 9-0 win.

The actual tradition of playing on Thanksgiving was initiated on Friday, Nov. 26, 1920, when the Tanks beat the crosstown rival Lombard Submarines 26-0, since many people were off due to the holiday

The Tanks began to play on Thanksgiving Day against the Huntington Boosters Nov. 30, 1922, a game won by the Tanks. In fact, many semi-pro teams began playing on Thanksgiving.

When the Tanks were forced to merge with the Portsmouth Spartans, the Thanksgiving Day game tradition ended. But when a Detroit group headed by radio owner G.A. Richards bought the Portsmouth franchise in 1933, the new owner asked players about ways to improve ticket sales.

Former Tanks players led by Glenn Presnell said they always had a good turnout on Thanksgiving Day. Not only did Detroit play the game on Thanksgiving, but the team made an arrangement with NBC to broadcast the game nationally, thus reaching a larger audience and developing a national clamor for repeating the tradition in the following years.

The tradition of NFL football on Thanksgiving Day has continued until the present day.

Tanks Memorial Stadium is one of only a few covered high school stadiums remaining in the United States. It was declared a Historic Landmark in 2001.

The Ironton Tanks were a famous and successful semi-pro team for 12 seasons, but there were two games that defined... read more