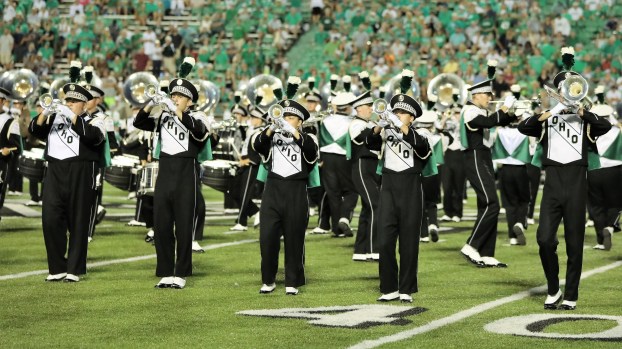 The Ohio University marching band, the Marching 110, performs at John C. Edwards Stadium on Saturday during the OU-Marshall University football on Saturday. “The Most Exciting Band in the Land,” practiced at the Dawson-Bryant High School football field before heading to Huntington, West Virginia for the game. (For The Tribune | Tim Gearhart)

COAL GROVE — On Saturday, some 100 fans got to check out Ohio University’s marching band, The Marching 110 AKA “The Most Exciting Band in the Land,” at Dawson-Bryant High School’s football field.

Dr. Suk said they try to practice at a local football field when they travel.

“I’ve known Tom for a number of years and his son, Logan, is a student at Ohio University, so I reached out to Tom and asked if we could use the field,” Suk said. “He’s said ‘Absolutely.’”

Zerkel, who was decked out in an OU Bobcat T-shirt, said he was absolutely happy to have the Marching 110 take to Coal Grove’s field.

He said several years ago, the marching band had practiced at a different high school field before the OU-Marshall game and when he found out they were playing again, he got in contacted with Suk and arranged for them to play at Coal Grove.

“Lots of my kids are here. I sent emails to all the band directors around the area about it,” Zerkel said. “I said we have two of the top marching bands in the nation are in Ohio and one of them are going to be in our stadium and you need to come see them.”

He said he was excited to see the performance.

After the practice was over, Zerkel was headed to Huntington to see the game since his daughter is in the Thundering Herd Color Guard. He was planning to get out of his Bobcat shirt.

“I will be changing once I leave here. I have a Marshal shirt to put on,” he said, adding he roots for the Herd during the OU-Marshall match ups. “I spent a lot of money on my own degree at Marshall, so I have to go with Marshall. I bleed Kelly green.”

The Marching 110 had to make some adjustments to their practice since the high school field is a six feet narrower to the sidelines than the college fields. They simply placed rubber strips to give them a guide.

It didn’t affect their practice as they ran through some warm up numbers before practicing their “Disco Show,” which consisted of a mash up of The Weather Girls’ “It’s Raining Men” and Gloria Gaynor’s “I Will Survive.”

Among the Dawson-Bryant marching band members in the bleachers was Nathan Stephen Davis, the band’s drum major.

“They are pretty good,” he said. “It was only a five minute show, but it was really, really good.”

He said he hopes to be in a marching band when he attends college.

“It is definitely one of my priorities,” he said. “Obviously, a lot of practice and rehearsal can lead to some great results.

“I thought it would be an interesting experience,” she said. “It was very interesting. It seems college band is very hard. There are a lot of things involved with it. It was a good time to watch them. I think it is one of the best bands in the land, as their saying goes.”

Suk said he was happy to see the bleachers filled with local fans.

“It’s great to see the community come out and it gives the band someone to perform for,” he said. “I appreciate the hospitality.”

J.C. Medinger, of Ironton, sat in the bleachers to watch the 110 practice.

“I am an Ohio University alum and I heard they were doing their pre-game practice here and I thought I would come up and check it out,” he said. He added he was in Athens two weeks ago for the home opener and was also headed to the game on Saturday. “It’s nice to see them here and it’s nice to not have to drive a couple of hours to see them.”

PEDRO — The four campgrounds at Lake Vesuvius Recreation Area closed at noon on Sept. 16 due to leaks in... read more