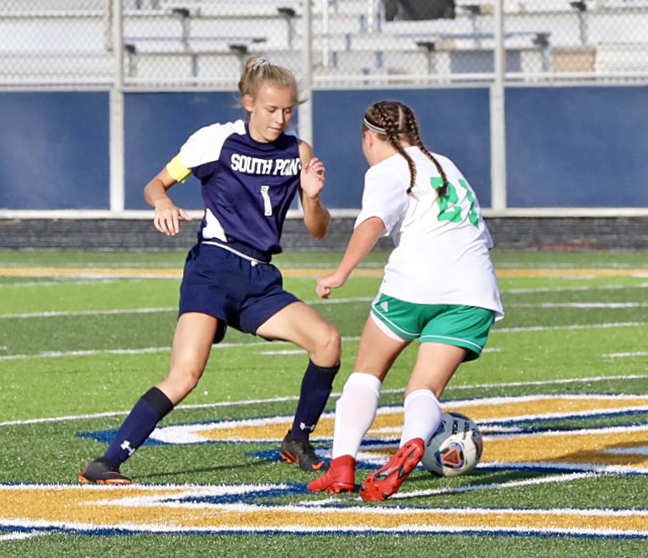 SOUTH POINT — In golf, they yell fore when they hit a shot. The South Point Lady Pointers were yelling “Four” in their soccer game on Tuesday.
The four came from Kylee Ellison who scored all her team’s goals in a 4-1 Ohio Valley Conference win over the Fairland Lady Dragons.
South Point took a 1-0 lead on a goal by Ellison at the 26-minute mark with an assist from Emilee Whitt.
“After a 20-minute hydration break, I challenge the girls to get a goal before the half and they did just that,” said Jenkins.
The Lady Pointers’ Sarah Roach gave an example of the team’s toughness when she was hit in the face and her nose began to bleed. However, Roach returned and finished the game.
“Roach could’ve easily said ‘I’m done for tonight,’ but instead went back out there and fought hard the entire game.”
Ellison came out firing in the second half with three unassisted goals at the 47, 50 and 59-minute marks.
Fairland sandwiched its goal in with 54 minutes on the clock.
Jenkins praised the play of Whitt and Abby Broughton.
“Whitt disrupted everything and was exactly where she needed to be all night. Broughton passed the ball extremely well,” said Jenkins.
Emily Byrd had 15 saves for the Lady Pointers.
Fairland 0 1 = 1
South Point 1 3 = 4

Jim Walker jim.walker@irontontribune.com SOUTH POINT — One look at the score and fans would think this was a tough, back-and-forth... read more